Not Using Midpoints In Astrology
Is Like Driving A Car
Without Wheels!

You read it right: not using exact midpoints in astrology is like driving a car without wheels!

Midpoints in astroloy are THAT important!

The majority of people who practice or study (real or serious) astrology don't use or know the midpoint system.

However, the midpoint system is one of the most reliable methods an astrologer can use, the more so because the midpoints are quite well researched and can be used 'scientifically' in that they have the same scope of meanings.

Any astrologer who takes him- or herself (and astrology) serious, should learn and use the midpoints.

Not doing so is missing a huge part of the puzzle!

If you find Mars at 7° Cancer and Uranus at 4° Aries, then the Mars/Uranus midpoint is right in-between both planets at 20° Taurus. 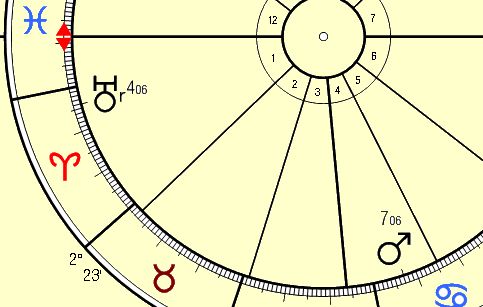 That's an easy one!

Let's take it a step further, based upon the previous example:

We just told you that, if Mars is at 7° Cancer and Uranus at 4° Aries, the Mars/Uranus midpoint is right in-between, at 20° Taurus.

These are the DIRECT midpoints because they are right in-between two planets, points or bodies along the shortest distance of the horoscope wheel.

Any planet, point or body exactly at this (sensitive) midpoint takes on, is colored by, the meanings of both planets, points or bodies.

If we find Venus at 20° Taurus when Mars is at 7° Cancer and Uranus at 4° Aries, then we have a DIRECT (occupied) midpoint.

We write this as follows: VE = MA/UR which reads as Venus (VE) is at the midpoint (=) between Mars and Uranus (MA/UR).

We always use the international two-letter notations of the planets, points or bodies (see later) when writing about midpoint structures.

The meaning of this (direct) midpoint (which ALWAYS contains three planets, points or bodies) is a blend of the meanings of the three factors.

Fortunately, you don't have to find out what this all might signify because some truly brilliant and meticulous astrologers have researched the meaning of all possible midpoints statistically and empirically for us all (see later).

In our example the planet is EXACTLY at the point in-between two others.

However, this is not mandatory.

We allow a maximum orb of 1° so that, if Venus would be between 19° - 21° Taurus, it would still be in the direct midpoint of Mars/Uranus.

In other words, Venus would still be conjunct (0°, orb 1°) the Mars/Uranus midpoint.

Hopefully, this is still quite easy to understand and follow so far.

Now that you understand the basic meaning of a midpoint, we can go another step further. 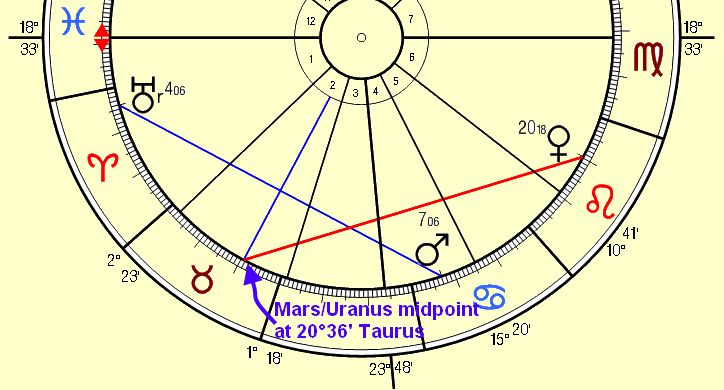 If Venus would be at 20° Leo, we would still say that VE = MA/UR or Venus is at the Mars/Uranus midpoint.

All multiples of the 45° aspect that 'aspect' this sensitive point in-between two other planets, points or bodies still build a midpoint structure in an INDIRECT way.

However, the meaning remains the same as if it built a DIRECT midpoint (0° aspect or conjunction).

When using the indirect midpoints, here too, the aspect should not be exact.

We again allow an orb of maximum 1°. 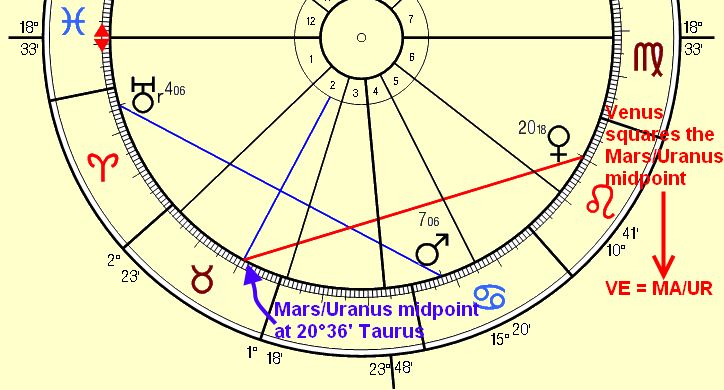 Why taking multiples of 45°?

Because it has shown that these aspects bring action, trigger events and bring things out in the open.

These aspects are related to the 8th Harmonic (a way of dividing a horoscope wheel).

More advanced astrologers use other Harmonics (other divisions) -- but that's another story and a more difficult and complex one.

If different midpoint structures have the same (sensitive) point occupied, then we talk about a planetary picture.

So, a planetary picture consists of at least two midpoints with the same basic planet, point or body.

Delineating midpoints is quite easy especially with the help of The Combination of Stellar Influences.

However, delineating planetary pictures (different midpoints together) becomes more and more difficult, the more so if many different planets, points or bodies (with often opposite meanings) are involved in the picture.

Blending the meaning of three planets is do-able. Even a fourth planet is do-able, but if more planets or bodies are found in the picture, it may become more challenging to find out the core meaning.

It takes heaps of experience and years and years of practice to learn to delineate multiple midpoints and planetary pictures.

We like comparing the planetary pictures with a puzzle.

Each piece of the puzzle is a single midpoint structure (of 3 planets, points or bodies).

It's the different midpoints together that build a planetary picture and show you the total image of the puzzle.

So, before judging (the total image), you have to make sure you have all the important pieces (midpoint structures) together.

If not, the image of the puzzle will be distorted and so will be your prediction/analysis.

Do know that the most exact midpoints (orb 0° 00' - 0° 01') ALWAYS manifest and it's wise to start with these very exact midpoints to understand how valuable this method is and how reliable at the same time!

For further study and understanding, we only recommend one single book that explains the method and lists and delineates all midpoints with three planets, points or bodies thoroughly.

It's a real masterpiece and called The Combination of Stellar Influences (CoSi) by Reinhold Ebertin.

You only need this book to know how it works and what it all means.

Even when, in the mean time, other astrologers have written additional books explaining and delineating the midpoints, the original one by R. Ebertin still stands out and is internationally recognized as the best one.

Now if you wonder how to calculate all these midpoints in a horoscope, because manually this can be a HUGE task, almost all modern software programs have a midpoint feature (often called midpoint trees, midpoint structures, midpoints, ...).

If you don't have access to a software program, there are some free online tools on the internet that may get you going: