Date.com is a private company founded on Valentine's Day in 1997 that is headquartered in New York.

It was re-launched on Valentine’s Day, 2000 as a subscription service. In early 2006, Date.com acquired online dating service Matchmaker. 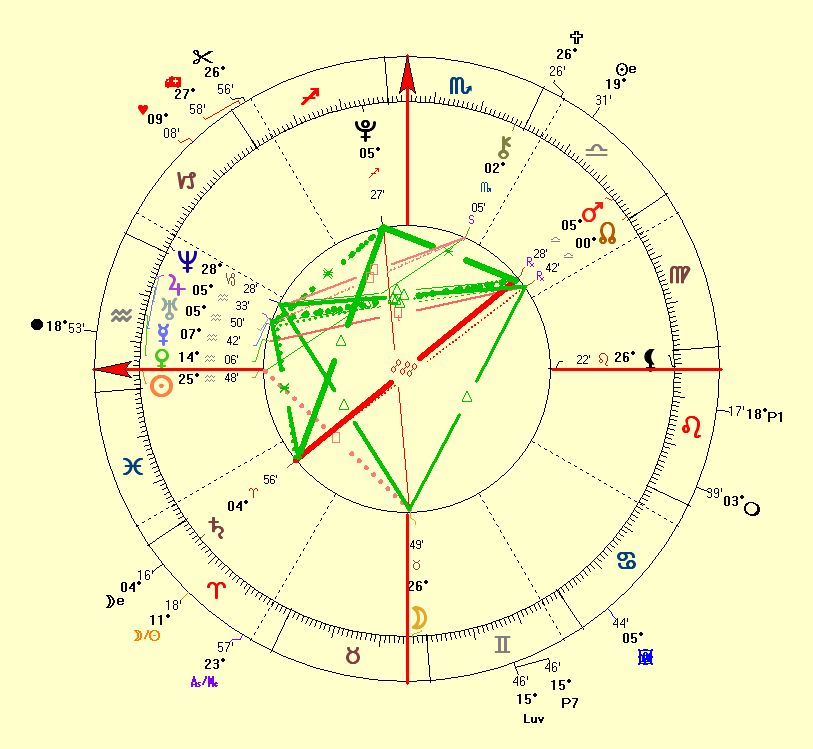 The corporation chart of Date.com has some remarkable astrological configurations:

But there is even more; Mars, Jupiter, Saturn, Uranus and Pluto are all posited at 4-5° in a sign, bringing these planets all together.

Any progressed or transiting planet at the same degrees will trigger this planetary combination.

Depending on the power and harmony of the progressed or transiting planet(s), this can bring a fortunate or an unfortunate event.

Anyway, a lot of planets around the same degree may bring prominence and (some) renown.

The Moon's North Node, signifying connections, is at 0° Libra, the most sociable degree of the zodiac.

This absolutely fits in the corporation chart of an online dating service as it signifies widespread connections and relationships.

Depending on the Moon's position, the corporation chart may have a grand trine too.

Venus is around 15° Aquarius, a most freedom-loving and individualistic degree. Perhaps Date.com mostly attracts separated singles.

Saturn in Aries opposes Mars, its own dispositor (because Mars rules Aries).

This is quite a bad situation, the more so because Mars is in Libra in its detriment, retrograde and "afflicted."

Mars is very self-centered, while Libra is most sociable, so that Mars does not feel well here.

This opposition reinforces the focus on the self-interest of Date.com.

The Moon may be in late Taurus or the early degrees of Gemini, depending on the exact time of "birth" of this online dating service.

The Moon is important in the corporation chart of Date.com as it's the handle planet in the bucket pattern.

The Moon here brings flexibility and adaptability following its own experiences.

Between 2009-2012 transiting Pluto will transit 5° Capricorn and will thus aspect the many planets at the same degree.

Pluto, however, will then build a square to Mars and Saturn in the corporation chart, indicating quite some problems.

As the apex planet of this T-square, transiting Pluto denotes intensity and huge (structural) transformations.

Date.com may try to reject any assistance or merging with other online dating services. In crisis situations,

Date.com will activate power reserves and take its own decisions, without any cooperation.

Often, this configuration denotes explosive endings of a life phase and turns of fate.

Also, transiting Saturn, planet of limits, will be around 5° Virgo late 2007 and in 2008, building a square to Pluto as well as an inconjunct to both Saturn and Jupiter/Uranus in the corporation chart.

Transiting Saturn will be the apex planet of a YOD configuration denoting sudden losses.

Even with some auspicious astrological configurations in the corporation chart, Date.com will have to endure hardship in this very competitive niche.

But because of the favorable configurations, it has the ability to take the right decisions.