We analyze the launch of First Affair on April 1, 2004 in Berlin, Germany (Sun on the Ascendant horoscope). 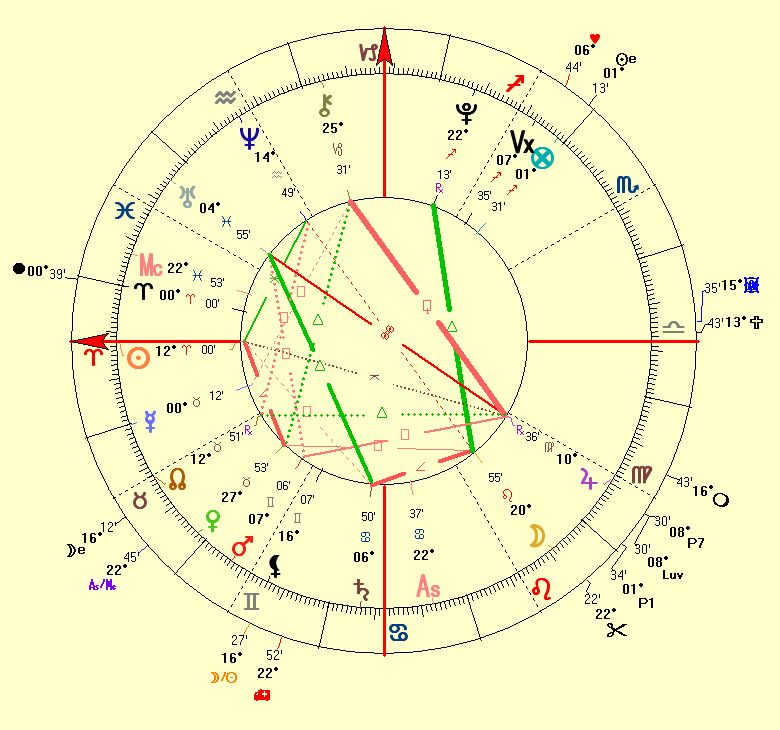 The Corporation Chart of First Affair

It is currently active worldwide (change the language by clicking the country-link beside the French country flag, top right on the screen).

Since its launch in April 2004, 260,762 women, men and couples had registered with this online platform, thus confirming the success of First Affair.

Reportedly, people have more flings than ever before. According to the Durex Local Report 2004, around one third of people surveyed have had an affair. In our opinion the numbers are higher...

When we analyze the horoscope of its launch, we notice a very prominent Venus, strong in its own sign Taurus and not building any major aspects.

Considering First Affair IS about flings, this fits the picture perfectly!

Venus is a very social planet and when posited in the sensual and most physical sign of the zodiac (Taurus), it becomes very attached to the body and physical pleasures.

Unaspected Venus may be related to problematic (restricted?) love lives looking for a more ideal kind of love.

Interestingly, most members of First Affair may have undisclosed love issues and are looking for other experiences and lovers.

Its thirst for love may be so high that unfaithfulness is just the only solution to finding another love match without breaking up the existing union.

And that's where First Affair enters the picture, in filling this void.

The current (2010) transiting Pluto-North Node of the Moon sextile natal Uranus will increase the numbers of members of this online dating service.

Above all, it's a configuration of love's sorrow. Because transiting Uranus too is part of the configuration, the illicit affairs will increase and make for highly sensuous experiences not found otherwise.

With transiting Pluto opposing natal Saturn in 2011 (and 2012), First Affair will build new structures and have to rewrite its own rules.

It will have to redefine what's important and powerful.

In 2011, transiting Saturn will temporarily oppose the natal Sun (the core of the business) and will mark resignation of some (or a) staff member(s).

It's likely there will be changes going on in the management of First Affair during 2011-2012.

In 2013, when transiting Pluto, Saturn and Uranus hit the natal Sun, there will be highly important structural changes coming along, mostly due to evolving technologies.

Because the transiting Nodes oppose the natal Moon's Nodes, we expect merging in 2013, making new connections and interactions with other dating companies.