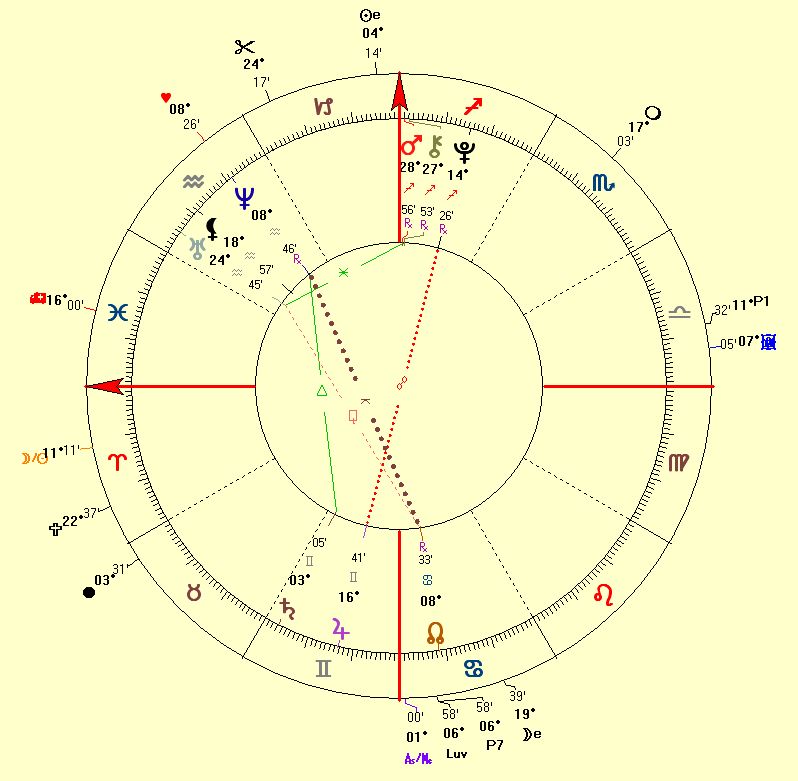 HurryDate is the first company to "marry" the online and offline dating worlds, offering singles both live events and unique online matching options.

Started originally as a singles event company in New York City in May 2001 by Ken Deckinger and Adele Testani, HurryDate now hosts 150 date "parties" a month held in 65 cities in the United States (in 28 states plus Washington, D.C.), the United Kingdom and Canada.

The corporation chart of HurryDate has a Jupiter-Pluto opposition denoting transformation of vision every 12-13 years.

Jupiter and Pluto are very expansive planets, representing the urge to grow and be successful (notice that Jupiter is Pluto's dispositor).

Unfortunately, Jupiter is not well posited in Gemini (the sign of its detriment), but eventually, depending on the exact day of foundation, Mercury may be in a later degree in its own sign Gemini so that this opposition may turn out highly succesful as well indeed.

If Mercury is in the early degrees of Gemini, the negative traits of Jupiter may come to the foreground: overoptimism and overindulging in one's vision and wishes can take a downward turn.

Because the exact day of foundation is not known, we cannot say much more about this corporation chart.

Early 2007, transiting Pluto is going to conjunct Chiron and Mars in the Corporation chart of HurryDate bringing a major breakthrough and new ideas into reality, the more so because transiting Uranus is squaring Jupiter and Pluto in the corporation chart too.

This transit will surely make this speed dating service more popular than ever.

In 2009, both transiting Neptune and Chiron will conjoin Uranus in the corporation chart denoting the importance of a totally wireless (dating) world.

2010 will activate a heavy T-cross containing the transiting Saturn-Uranus opposition squaring the Mars/Chiron conjunction (both points are the apex planets) in the corporation chart.

Some kind of a break up will be in the air then for the years to come.