Matchmaker was launched in August 2000 as a new addition to the Lycos Network of premium brands. 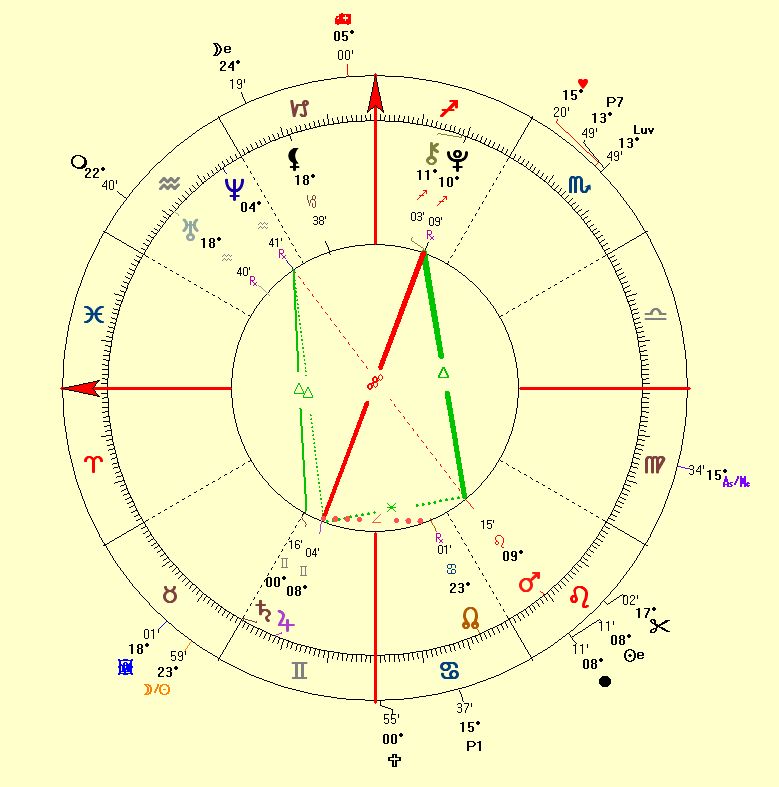 Saturn is placed on the critical 29th degree of Taurus (The Weeping Sisters), but it may as well be on 0° Gemini, denoting an awful lot of change.

The North Node is at the 24th degree Cancer, a degree of a merging in compliance with a cost-benefit analysis.

We may expect Matchmaker.com to merge with another Corporation later on.

The opposition between Jupiter in Gemini, the sign of its detriment, and Pluto in Sagittarius reinforces our assumption (the more so because Jupiter is the dispositor of Pluto!).

The beautiful Jupiter-Neptune trine can be very helpful in a unification, which will give Matchmaker.com more strength.

Update Feb. 21, 2006: Avalanche, LLC, a company owned and operated by the founders of leading online dating site Date.com, Inc. has acquired Matchmaker.com. Our prediction about the merging hit the nail!!

Depending on the position of Mars, Matchmaker.com can gain power (on condition that Mars makes a trine to Pluto).

Nevertheless, with the Jupiter/Chiron midpoint and the Venus/Jupiter midpoint making an exact aspect to Pluto, Matchmaker.com must be (very) successful in the field of online dating.

These reciprocal aspects will break all boundaries.

Online dating will get a new dimension, thanks to the new oncoming innovative technologies.

These aspects do point to a new technological era.

When transiting Pluto will enter the sign of Capricorn (in 2009) it will be 150° from Saturn, bringing about a world-wide crisis and deep transformations.

Transiting Neptune too will then make a 150° aspect to the North Node, causing deep structural changes and people leaving Matchmaker.com.