The Significance of  Intercepted Lights in Relationships

When talking about "the Lights", only the Sun (that shines and radiates light) and the Moon (that reflects light) are taken into account.

When studying the astrology of love and relationships, you will know by now that:

So, whenever you want to know information about the partner, it's a good start to delineate the respective Light.

In particular, pay attention to the standouts because they are very telling.

One of the standouts has to do with an intercepted Light. 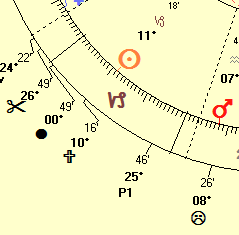 When the Sun and/or the Moon are in a zodiac sign that has no house cusps in it, they are told to be intercepted.

In other words, when the full 30 degrees that a zodiac sign counts fall in a house having another zodiac sign on its house cusp, it's intercepted.

The image right shows an intercepted Sun in Capricorn.

When the Sun or the Moon are intercepted, they reflect some essential characteristics of the respective partner.

Intercepted Lights (and planets as well) feel either trapped, hidden, don't come out openly, can be shy, restricted, not allowed to express themselves properly.

Health may be a concern too.

In most instances and most often, the partner just shuns the limelight.

We use the Topocentric house system (which almost equals the Placidus house system) and have found the rule to work flawlessly.

Articles Related to Love and Astrology