The Most Aspected Planet in Synastry

Home Love & Astrology The Most Aspected Planet in Synastry

When comparing two natal charts for compatibility we always look for the standouts.

What is missing, are there voids or are there predominant factors noticeable?

In doing so, you may find out that, in some cases, a certain planet of one of the partners receives lots of aspects, while some other planets are unaspected and seemingly void.

These are very important indications.

Let's take a look at the following aspect grid between two partners. 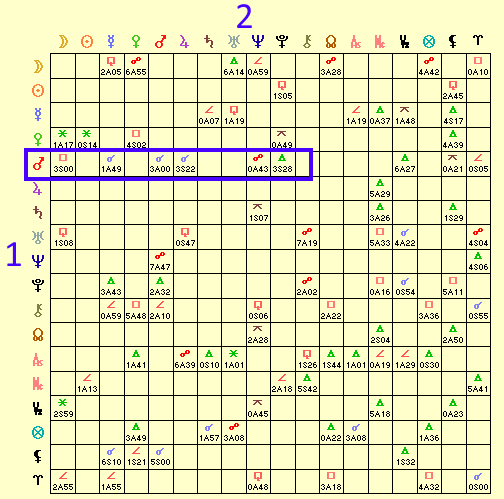 Mars of partner 1 is very well aspected, compared to the other planets.

It denotes that Mars of partner 1 gets lots of attention, is triggered a lot by the planets of the other partner and will thus manifest powerfully, for good or ill.

Mars takes the initiative and chances are the Mars partner (here, partner 1) is the one who ignites events or experiences.

In case the Mars partner is a woman, she may take the lead, be the more assertive partner.

In case the Mars partner is a man, he too may take the lead, but may be more pushy though and, in some instances, aggressive.

So, a planet that receives the most aspects in a very noticeable way will manifest its basic principles profoundly in the relationship between the partners.

The planetary meanings will differ slightly between a man and a woman but because not all charts in synastry show a most aspected planet, we have not been able to determine the most significant differences yet.

When the most aspected planet is:

Articles Related to Love and Astrology