The (Love) Life of Angelina Jolie 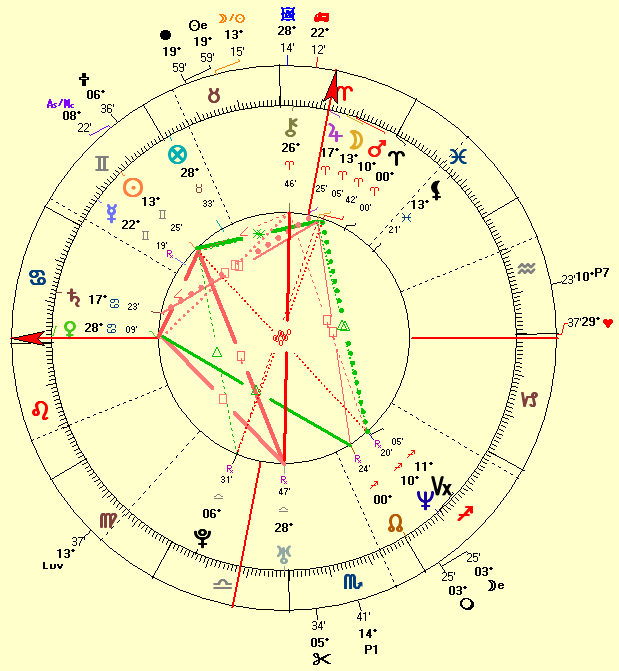 Standouts in the natal chart of Angelina Jolie

In short, we are looking for factors that are out of balance.

Not to overwhelm you with information, we will assess the horoscope of Angelina Jolie by looking at the factors that only have some meaning for her love life.

In this interesting horoscope of Angelina Jolie we can find the following highlights:

The Ascendant, Venus and Uranus at the same degree can be best delineated by blending the meaning of these three planets together.

If you find it difficult to delineate the combination of three planets or points, we recommend following the method used by the Schools of Cosmobiology and Uranian Astrology in their midpoint analyses.

These schools always delineate a combination of three or more planets and you will find the descriptions listed in Reinhold Ebertin's stunningly accurate "The Combination of Stellar Influences", Alfred Witte's groundbreaking "Rules for planetary-pictures: The astrology of tomorrow" or the Appendix II of Noel Tyl's popular "Solar Arcs" MOST helpful and often ingenious.

If you're really into astrology or are planning to delve deeper into it, you will never want to miss Reinhold Ebertin's and Alfred Witte's books!

So, when the Ascendant, Venus and Uranus come together they denote (among others) sexiness, an intense flair and attractiveness to others, some "show off", sudden feelings of love or love at first sight.

Angelina Jolie will almost always fall in love with anyone!

This trio points to a very detached and independent personality.

It's a very artistic combination too.

Note that disruptive Uranus is exactly square her Ascendant-Descendant axis of relationships...

Angelina Jolie can't stand to be pinned down and wants total freedom and needs a lot of (superficial) social contacts.

Because of the waning sextile, she's very interested in 'children of the others.' (another 11th house meaning).

The exact Mars-Neptune trine at 10° in a sign signifies loss of energy sooner or later.

Her energy will drain and there may be periods in her life that bring a loss of focus.

The Mars-Neptune combination in fire signs does give plenty of energy though, but it goes till exhaustion and is meant as an escape mechanism.

When Jupiter, Saturn and the MC are at the same degree we have to do with someone who loves to change the place and domicile.

Also, she will always be happy on her own and will never mind separating or parting which will only make her more happy.

The combination is quite a philosophical one too!

Between brackets, it's interesting to note that Saturn is the ruler of her 7th house of partnerships and is in its detriment in Cancer in the 12th house square the Moon, its own dispositor, which is a very bad situation regarding marriages!

Also note that Uranus, the co-ruler of her 7th house squares her 7th house cusp (Descendant) denoting some rebellious behavior which may upset others (and the partner).

All planets below the horizon are retrograde which may denote uneasiness within tight family situations.

It's not recommended that she involves in domestic affairs.

Any planet or point at 0° in any sign, shows a new beginning.

0° Sagittarius brings a whole lot of connections (symbolism of the North Node).

You may recall that Britney Spears has Uranus at 0° Sagittarius and that we wrote that "0° Sagittarius is quite a positive (and very public) degree.

With the Node in this position, she has (changing) connections to a whole lot of successful people too.

When Venus rises and Jupiter culminates, we have a configuration that makes very popular.

Venus and Jupiter together always do point to popularity!

In Angelina Jolie's horoscope both planets bound the 4th Quadrant (signifying our society).

She's popular in society because she has the looks (Venus on her Ascendant) and wants to bring a message to the world (Jupiter on the MC).

(Personal) planets and points conjunct important Fixed Stars are of the utmost importance:

A dominant Fire element and a totally lack of (fixed) Earth indicate lots of drive, impulses and urges.

It also signifies that she takes a lot of initiatives without being able to sustain energy till the end. Angelina Jolie definitely lacks persistence.

In a female chart an exaggerated emphasis on masculine (fire) signs can be problematic in relationships.

Angelina Jolie clearly wants to conquer and push herself through.

She may act in a very linear way and wants instant gratification.

She will get mad when her desires are not met instantly.

This is one of the indications in a female horoscope pointing to a turbulent and quite unstable emotional inner life often resulting in auto-mutilation and self-destruction.

This is confirmed and even reinforced by the tight Moon-Mars conjunction in Aries opposite Pluto, ruler of her 5th house.

The love life of Angelina Jolie

What do we know about Angelina Jolie's love life? 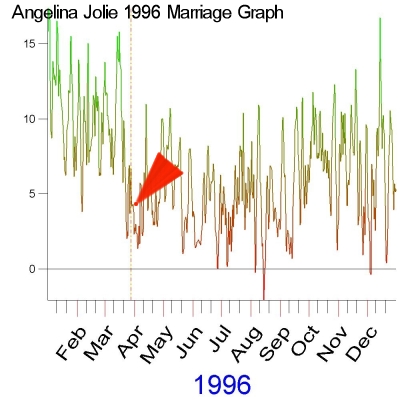 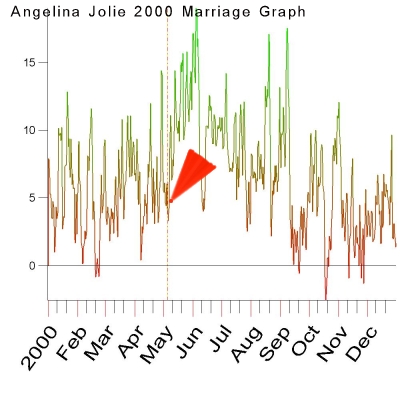 The red arrows point to the dates of marriage and the Graphs clearly show Angelina Jolie twice married on the wrong dates!

You better never marry on a date the Marriage Graphs are in red or going down.

Once more this is a proof of the validity of our own researched algorithms.

Click here if you want to know how to get Your Marriage Graphs.

When we at Cosmic Technologies analyze horoscopes we often consult Astrodamus 1.0™ to know what the future may hold for the native.

The first thing we do is trying to find out if the time of birth is accurate by letting the automated rectification module of Astrodamus do its work.

However, when we entered the dates of Angelina Jolie's marriages, divorces and the birth of her daughter, the automatic rectification module came up with too many possible times.

Every time Astrodamus lists many possible times, don't use one of them and stick with the original time. And that's what we did.

Most predictive blocks during 2006-2008 point to problems/separation in the immediate family (in different blocks these words are repeated over and over so that this surely will work out), real-estate transactions and some problems with children (or her child).

However, we were struck by the following blocks:

Clearly, Astrodamus 1.0™ predicts something to happen in the family and/or with real estate during the overlapping time frame of both blocks!

They may move or relocate or buy a new house.

How will Angelina Jolie fare according to Astrodamus?

According to a Reuters press report, she delivered a boy first (Knox Leon) around 06:27 pm (18:27) by Caesarean section, followed within a minute by a girl (Vivienne Marcheline).

According to the medical staff, the Caesarian was moved forward for medical reasons.

There is no marriage date set though.

Update May 14, 2013: Angelina Jolie revealed that she had 2 preventive mastectomies in February 2013 followed by reconstruction with implants in April 2013.

She also told that her decision was based upon the fact that she carries a defective BRCA1 gene.

She had three operations: on February 2, 2013; on February 16 for the 2 mastectomies and on April 27 for the reconstruction.

Rumors go she will also plan to remove her ovaries.

It all unfolds before our eyes...

Update August 28, 2014: Reportedly, Brad Pitt and Angelina Jolie were secretly married in a private ceremony attended by family and friends at their Château Miraval home in Correns (Var area), France.

In advance of the nondenominational civil ceremony, Brad Pitt and Angelina Jolie also obtained a marriage license from a local California judge.

The judge also conducted the ceremony in France.

This is a second marriage for Brad Pitt – he was divorced from Jennifer Aniston in 2005 – and a third for Angelina Jolie. She was previously married to the actors Jonny Lee Miller and Billy Bob Thornton.

The couple began leasing Chateau Miraval in 2008 and bought it three years later.

The sprawling property has its own vineyards and a tiny chapel in the grounds with standing room for around 20 people.

Update March 24, 2015: Reportedly, Angelina Jolie made the decision to have her ovaries and fallopian tubes removed as a preventative measure in March 2015.

After weighing her options, just as she did before getting a preventative double mastectomy in 2013, she decided to go forward with the surgery because she carries a gene that gave her a 50 percent risk of developing ovarian cancer.

"In my case, the Eastern and Western doctors I met agreed that surgery to remove my tubes and ovaries was the best option, because on top of the BRCA gene, three women in my family have died from cancer," Jolie wrote.

"My doctors indicated I should have preventive surgery about a decade before the earliest onset of cancer in my female relatives."

"Last week, I had the procedure: a laparoscopic bilateral salpingo-oophorectomy," wrote Jolie.

There was a small benign tumor on one ovary, but no signs of cancer in any of the tissues.

Angelina Jolie kept her uterus because there is no history of uterine cancer in her family.

FEAR is highly self-destructive and she's a tragic example of all this!

Also know that the theory about genetic diseases may be wrong.

More and more evidence points this out (the study of this is called Epigenetics).

Your mind(set) can change quite a lot!

The actor and director cited irreconcilable differences as the cause for the split.

Jolie has reportedly asked for physical custody of their six children, with Pitt allowed visitation rights.

She is not asking for spousal support.

The date of separation is listed as 15 September 2016.

This can be a very paranoid pattern but also a highly threatening one.

This fully clarifies why both partners separate just now: 10° in a sign is for both a highly sensitive and turbulent degree.