The (Love) Life of Johnny Depp 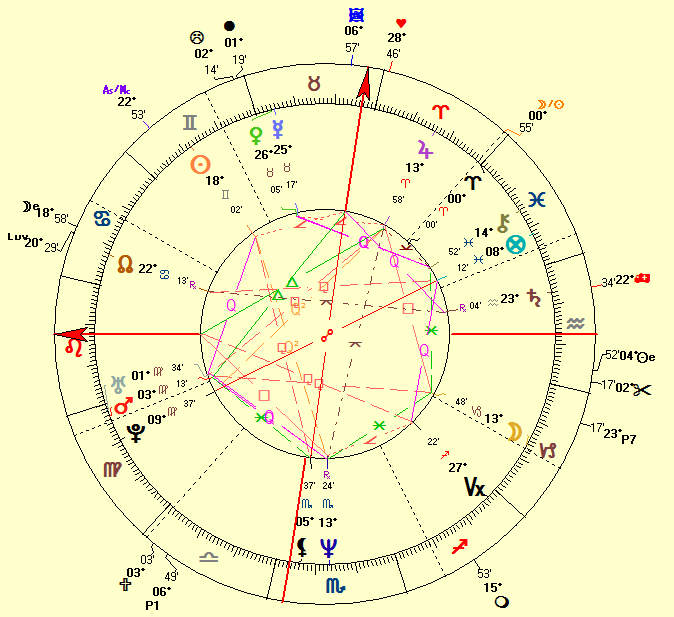 Standouts in the horoscope of Johnny Depp

Not to overwhelm you with information, we will only assess the horoscope of Johnny Depp by looking at the factors that only have some meaning for his love life.

The Moon, Jupiter and Neptune at the same numerical degree in a sign  mark spendthrift, some carelessness or irresponsible behavior, living in a dream world, a life full of illusions and/or a world full of delusions.

Actually, this combo reflects the 'actor' because it's a highly creative pattern as well.

However, delusions and substance abuse often go hand in hand and that's what this pattern also reveals.

The Neptune-Ascendant square confirms (self-)delusions pertaining to his relationships (in a wide sense).

Neptune is about imagination and when imagination takes over, his relationships may become a challenge.

Johnny Depp may not see the others as they are, not in a factual way but in a distorted way.

The Virgo stellium points to a perfectionist nature, especially with Mars in Virgo.

Mars, Uranus and Pluto all conjunct show the need to act independently, on his own terms.

He needs to be free to do what he wants, when he wants it.

In the natal chart of a man, this stellium may result in sudden outbreaks of violence and anger.

Interestingly and reportedly, he has many tattoos and perhaps this stellium just denotes that also.

Moreover and reportedly, he suffers from nearsightedness since birth, and is nearly blind in his left eye.

The Mars-Uranus-Pluto stellium also signifies some recklessness and the love for speed (sports cars for example).

Johnny Depp has been married for the first time to Lori Anne Allison from December 24, 1983 till their divorce on March 7, 1986.

He has dated several female celebrities, and has been engaged to Sherilyn Fenn, Jennifer Grey, Winona Ryder and Kate Moss.

After 14 years together Depp and Paradis announced their separation in June 2012.

Reportedly, Johnny Depp married Amber Heard in the evening on February 3, 2015 in a very small private wedding ceremony at their home in Los Angeles, CA/USA.

A 2nd wedding ceremony was held on February 7, 2015 on his private Island (Little Hall's Pond Cay) in the Bahamas.

The chart of his February 3 Wedding below is calculated with the Sun on the Ascendant since the time of the wedding is unknown. 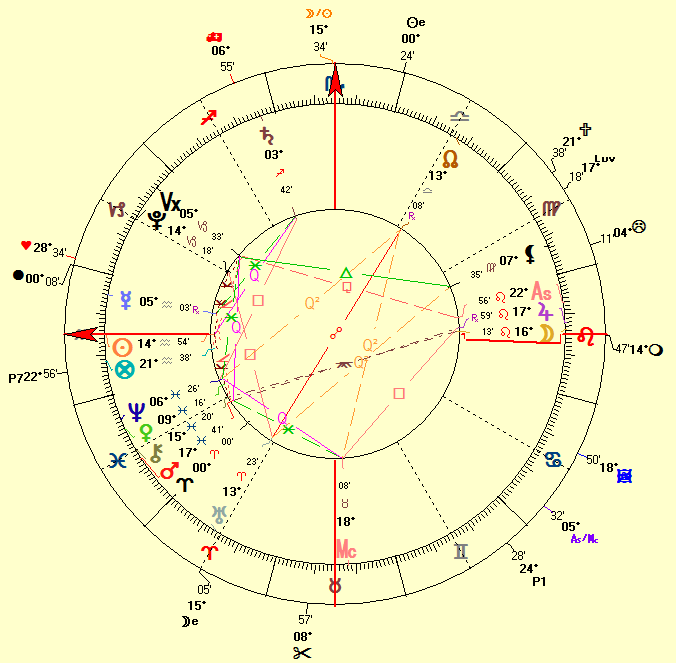 We only look at what stands out on that day:

In this marriage horoscope the Sun at 14° Aquarius suggests contrary behavior, reversals, breaking up, breaking free.

Clearly, the Sun's not at a good position for a marriage horoscope.

Uranus, the Sun's dispositor is exactly conjunct the South Node of the Moon adding to turbulent events and breaking up.

The midpoints in the 45° dial/list point to:

It comes as no surprise that Amber Heard reportedly filed for divorce on May 23, 2016 after domestic abuse that happened around the May 21, 2016 Full Moon at 1° Sagittarius.

Also, this transiting Jupiter-Saturn square hits Uranus and the Nodes in the Wedding chart, resulting in domestic upheaval and upsetting experiences ending in divorce.

Update June 1, 2022: Their divorce drew media attention as Amber Heard alleged that Johnny Depp had been abusive throughout their relationship.

In 2018, Johnny Depp claimed that Amber Heard had abused him before he unsuccessfully sued the publishers of a British tabloid for defamation under English law.

Johnny Depp later sued Amber Heard for defamation after she wrote an op-ed saying she was a public victim of domestic violence.

In April 2022, the trial about the alleged domestic abuse started and it was especially popular on social media.

After six weeks of testimony a jury ruled for Johnny Depp in his lawsuit, finding that Amber Heard had acted with “actual malice.”