The (Love) Life of Jessica Biel 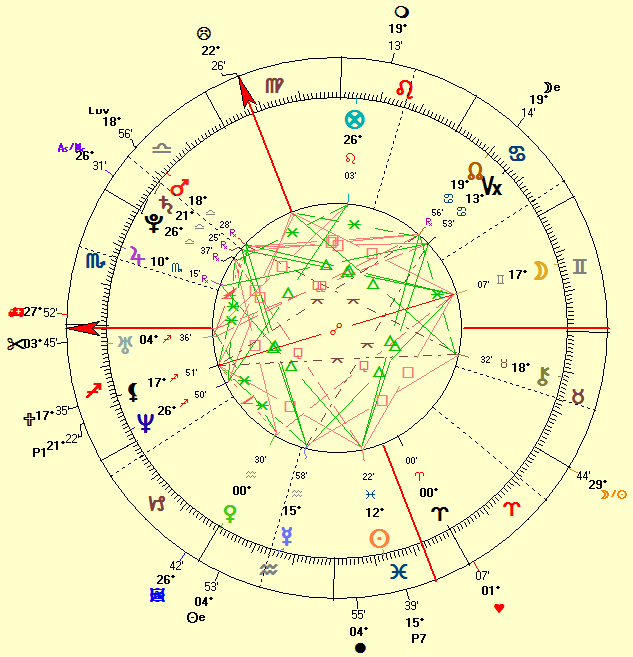 Standouts in the horoscope of Jessica Biel

Not to overwhelm you with information, we will only assess the horoscope of Jessica Biel by looking at the factors that only have some meaning for her love life.

An emphasis on the eastern hemisphere implies an interest in our society and her own life and development.

She takes life in her own hands and wants to be meaningful in society as well.

Most planets posited in air signs and mutable signs indicate that she has a prominent Gemini nature.

Gemini is a double sign and versatile as well, making that she has many different interests (confirmed by Venus between Neptune and Mercury).

Gemini is always on the go, on the move and mentally busy.

Mercury, Venus and the Ascendant are all at a so-called "critical degree", which points to the following:

Whenever someone has two planets/bodies at 0° in a sign, it connects with 0° Aries (the Vernal point, representing "the world at large").

The exact Neptune-Pluto sextile is a generational aspect and of less importance actually.

However, we at Cosmic Technologies, still find such aspects very revealing when taking into account the houses both planets rule because these houses are linked closely together.

Clearly, this aspect is a very private one, and chances are Jessica Biel may be very set on her privacy.

A Bucket pattern is an astrological pattern in which all planets in the horoscope wheel are found within 180°, like forming a bowl, except for one planet that is almost opposite the bowl -- acting like a handle.

In her natal chart, the Moon is the handle "planet" and is found in the 7th house of "others", of the partner, of encounters and an audience.

The Moon becomes a focal point, gathering all the energy so that it does not wonder that Jessica Biel needs an audience, a public to serve.

It's told that the Moon in the 7th house is not always successful in choosing a mate and often they are chosen by others.

The Moon in fickle Gemini is not stable enough to continuously relate with one person but prefers many recurring encounters or meetings.

The Moon in the 7th house of "others" is able to "tune into" a public, capture the emotions of those in front of the native.

Hence, the Moon in the 7th house is a perfect placement for an actress.

Because the Moon is in mental or cerebral Gemini in the mental 7th house, relationships are rather superficial and detached.

The love life of Jessica Biel

Jessica Biel had a relationship with actor Adam LaVorgna from 1998-2001.

She was romantically linked to actor and film director Chris Evans whom she dated off and on from 2001 to June 2006.

Jessica Biel and Derek Jeter, an American former professional baseball shortstop, were in a relationship for a few months from 2006 - 2007.

She began dating singer and actor Justin Timberlake in January 2007 after she met him at the 64th Golden Globe Awards on January 15, 2007.

Timberlake reportedly asked a mutual friend if he could call Jessica Biel and ask her out, and he got the OK to give it a shot. "I did it the old fashioned way — by telephone," he told at a 2012 press conference reported by Us Weekly.

The early days of their relationship were marked by distance due to their careers.

Jessica Biel is told to say: "We were just chatting on the phone for hours. So, we never really kissed for a very long time." Even still, she said she knew early on he was the one, and said she still keeps an email she sent to her producing partner that said "I will marry this man."

However, after four years together, the couple announced their split in March 2011 for three months.

By fall 2011 Jessica Biel and Justin Timberlake reunited, became engaged in December 2011, and married on 19 October 2012 at the Borgo Egnazia resort in Fasano (Puglia), Italy.

Timberlake proposed to Biel in 2011 in Montana, and later named a song after that location.

Jessica Biel and Timberlake have one son, Silas Randall Timberlake, born on April 8, 2015 with the help of an emergency C-section -- the opposite of the birth that she had hoped to have.

Jessica Biel reportedly has told: “I was obsessed with everything organic, toxin-free, natural, and homeopathic for our kid, who came into this world in an operating room through an incision. I was a dictator, making myself and my husband insane!”

Update July 2020: Reportedly, Justin Timberlake and his wife Jessica Biel have welcomed their second child together, another baby boy, around July 13 or 14, 2020.