The (Love) Life of Ariana Grande 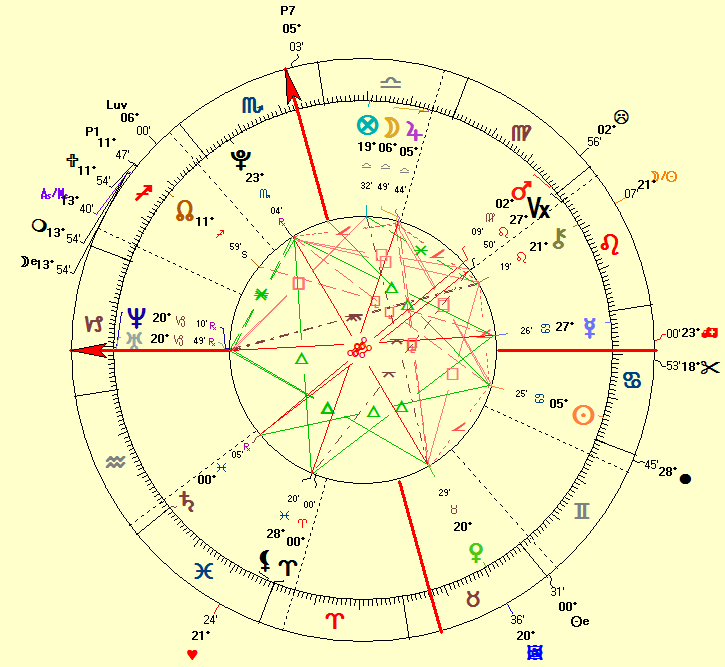 Standouts in the horoscope of Ariana Grande

Not to overwhelm you with information, we will only assess the horoscope of Ariana Grande by looking at the factors that only have some meaning for her love life.

Her (love) life is especially influenced by this degree area and whenever a (transiting) planet hits 20° in a sign, it will affect her relationship(s) (in the widest sense) for good or ill.

In that way, transiting Saturn at 20° in a sign, for example, will bring sadness or even mourning, a cooling off of bonds, and/or break-ups or separation(s).

Saturn (being the ruler of the Ascendant also) at a "critical degree" (0° Pisces) indicates a huge longing for exceptional things.

This is a very idealistic degree, often pointing to being bored easily, the need to look up to a partner but also the presence of certain psychic assets (premonitions).

There are no planets in fire signs, suggesting she's lacking some self-confidence and the zest of living might diminish over time because she carries too much on her shoulders.

In other words, memories from the past may in the long run interfere with hope for the future.

The rulers of the 1st and 2nd houses in mutual reception indicate lots of purchases (for oneself).

Often, this indicates that the native collects goods and just wants "to have" to feel more secure and valued.

The interceptions in the 2nd-8th house axis of possessions and money-related matters, are indicative of some issues with values and self-esteem.

Relationships may get intense and passionate but will also involve power conflicts and/or unhealthy victim-savior bonds.

These interceptions also indicate some struggle with the practical things in life and not always being able to tackle the daily realities.

People with interceptions in the axis of finances almost always have to do with finances (money, possessions, either their own or those of others), for good or ill.

Predominant cardinal signs coincide with industrious people who are very good executors, though often a bit too mechanical (and acting on emotions and impulses rather than (fore)thought).

They are do-ers, initiators who want to accomplish something.

Especially with her Capricorn stellium (and Ascendant), Ariana Grande is ambitious and aims high.

The love life of Ariana Grande

She was next linked to one of her backup dancers, Jordan Viscomi (from December 2011 to February 2012).

She has also been linked with Australian comedian Jai Brooks in an on and off relationship from July 2012 to August 2013 and from May 2014 to July 2014.

She briefly dated singer Nathan Sykes from August 2013 to December 2013 - with Jai Brooks tweeting that she’d cheated on him.

Ariana and Nathan then broke up.

Ariana Grande also had a relationship with American rapper Mac Miller since August 2016 but they broke up around May 2018.

She then began dating real estate agent Dalton Gomez (born 7 August 1995) and they were engaged on December 20, 2020.

They got married on May 15, 2021 at their Montecito, California home in front of less than 20 guests.