The (Love) Life of Kevin Costner

Standouts in the natal chart of Kevin Costner

Not to overwhelm you with information, we will only assess the horoscope of Kevin Costner by looking at the factors that only have some meaning for his love life.

In the horoscope of Kevin Costner we can find the following items:

A Sun-Neptune square reminds us of what is often called the 'Herodus-effect' denoting that there can only be one person appointed to be the 'King'.

People with a dominant Sun-Neptune square can't stand somebody else being superior.

They fear concurrence and react by trying to be better and better. This is quite an inspirational combination of high ideals.

The Moon and Jupiter in mutual reception, is a most beautiful combination, making Kevin Costner popular and well-known (Jupiter) to the public (the Moon).

A Moon-Jupiter combo is always a blessing in a horoscope because it makes sympathetic.

There often is a feeling of grandeur and extravagance in one or the other way.

People with a Moon Jupiter combo have an innate faith in life, a strong belief system (and often a religious one too).

In the horoscope of Kevin Costner, the Moon is ruler of the 11th house and Jupiter is the ruler of the 4th house. This often brings separation from the home.

The Uranus-Ascendant aspect is a very independent, individualistic one. Kevin Costner can be seen as a popular rebel (Uranus conjunct Jupiter).

A T-square with the apex Neptune in the 2nd house of income and finances can be quite tricky.

Dissolving Neptune brings a lot of expenses. Neptune 'dissolves' the own property and material goods.

On the other hand it is found that Neptune in the 2nd house brings financial gain too. It's quite double.

The apex Neptune may bring about quite some desillusions in the life of Kevin Costner, especially in relationships (Neptune in Libra, sign of relationships).

This T-square between the Sun, Jupiter, Uranus and Neptune is a classical example of 'succes in the film industry' (just delineate a T-square as a midpoint where the apex is in the middle of the other factors).

The marriage horoscope of Kevin Costner

It's his second marriage. He announced his engagement to girlfriend Christine Baumgartner June 26, 2003.

Before analyzing this marriage chart of Kevin Costner we were curious what our own researched Marriage Graphs would tell...

Let's take a look at his 2004 marriage potential with our own researched Yearly Marriage Graph to see what his best days to marry are: 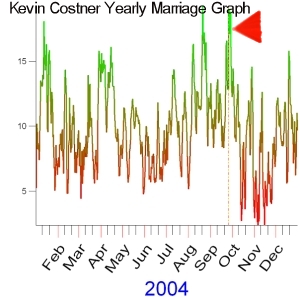 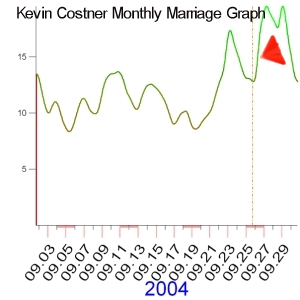 According to our own researched Monthly Marriage Graph, this day is a fortunate one.

Now, let's take a closer look at this marriage horoscope of Kevin Costner for a moment: 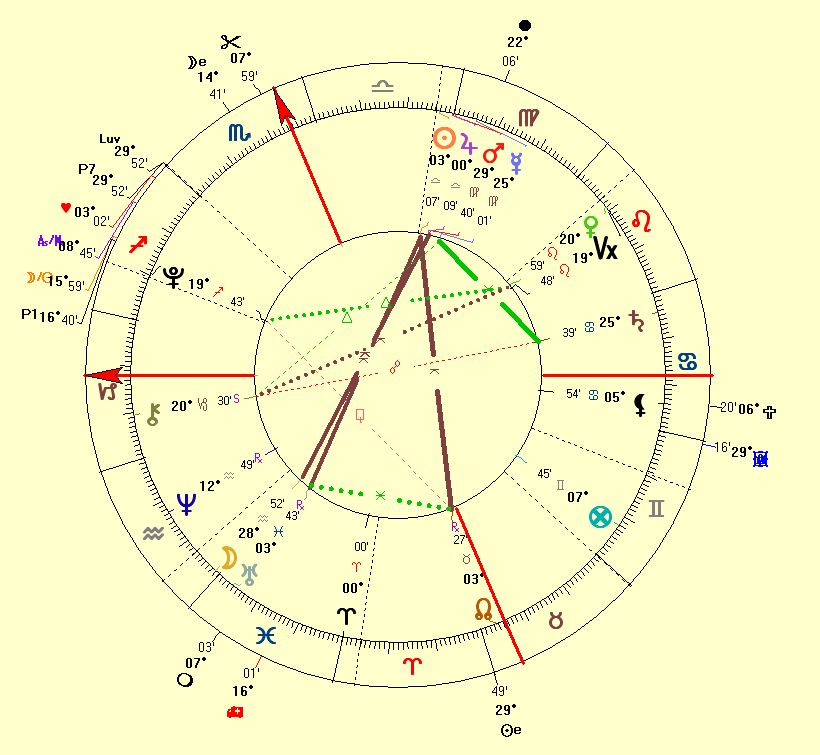 And again, let's only assess the standouts:

In this marriage horoscope of Kevin Costner we find a Moon void of Course at 28° Aquarius.

A Moon void of course will not change the status.

If people already know each other well, they will remain together but if they don't know each other and have their first date, their status will not change and they are likely to not get on further.

Mercury and Saturn are in an exact sextile; Mercury being strongly dignified in Virgo and Saturn being in its detriment in Cancer.

Mercury and Saturn are forming the base of a YOD with the Moon being the apex.

However, there may be some discussion here as some astrologers have found that a "real YOD" is created when the apex is the slowest moving planet of all three planets.

In the marriage horoscope of Kevin Costner this is not the case.

The faster moving Moon is the apex so that this configuration may just be an ordinary double-inconjunct.

We have not researched any differences in YOD-configurations (yet) and just point to the prime fact that Mercury and Saturn are exactly sextile in the same degree.

Clearly, Mercury is the stronger planet, being in Virgo and the lower inconjunct with the Moon has some connection with adjustments to be made in the daily routine activities.

Mercury is a mental planet too and some adjustments on a mental level will also have to be made.

This is a very analyzing and thinking combination, sorrowful thinking that is with a lot to ponder on.

This Mercury-Saturn combination is also about (strategically and) detailed plannings.

The very exact Sun-Uranus inconjunct denotes sudden upheaval, events that thwart the plans and brings about sudden changes in the course of the marriage.

This is confirmed by the fact that the Sun and Uranus are in the degree of the Moon's Node denoting a (sudden) crisis of some sort in the marriage of Kevin Costner.

Here too three factors are forming a YOD with the Sun being the apex.

However, the same remark as mentioned when we discussed the Mercury-Saturn sextile has to be made here.

This may not be a "real YOD" because the faster moving Sun is the apex. So, this configuration may just be an ordinary double-inconjunct.

As the Sun is conjunct Jupiter, Jupiter may be the apex planet too (even if we don't consider it this way, because three planets in the same degree are far much stronger and dominant).

This double-inconjunct configuration between the Sun, Jupiter, Uranus and the Node brings about fortunate changes and signifies a favorable turning point.

The double-inconjunct has to do with desire and long-lasting adjustments (the Sun, Jupiter and Uranus are building an upper inconjunct of a fixed Scorpio signature).

As you may recall the 0 degrees denote a new beginning.

0° Libra is the most sociable degree of the zodiac.

This degree is all about socializing, social gatherings and similar events.

With expansive and enlarging Jupiter, the events are more widespread and becoming "bigger".

This is a most beneficial degree in marriage horoscopes. It did not surprise us that the ceremony lasted 3-4 days.

There is exchange between love (Venus) and the heart (the Sun) and this is considered to be a very favorable combination in any marriage horoscope.

The planet Neptune is unaspected and retrograde in the wedding chart of Kevin Costner.

Neptune is about hidden things, about withdrawal, secrets and seclusion.

Neptune is vague and can point to infinite devotion.

Neptune can represent the ultimate dream and wonderful ideals.

Unaspected planets are 'dis-connected', on their own and most powerful.

An unaspected Neptune denotes pure romance, living in a dream.

Aside from the aforementioned items, also note that the ruler of the 1st house (Saturn) and the ruler of the 7th house (the Moon) are in an upper inconjunct (on condition that the time of the marriage of Kevin Costner is exact).

In some ancient texts you will find that the Ascendant and the first house ruler of the marriage horoscope represent the Groom, the 7th house and its ruler represent the Bride.

Saturn is in a bad position in Cancer because it is in its detriment. It receives a sextile from powerful Mercury and an inconjunct from the Moon (the Bride).

The Moon in a late degree is weak and brings fear as well as desire.

Its hard to say how this aspect will evolve in reality.

As you may know, an inconjunct most often points to incompatibility, something that is missing, absent, etc.

On the one side this can signify that both partners are incompatible or will divorce/separate.

On the other hand, this inconjunct may point to the (huge) age difference between Kevin Costner and Christine Baumgartner.

They differ almost 19 years from age.

We should be very careful in delineating some factors in this marriage horoscope.

We should not try to jump to conclusions too soon because we are not sure if the time of the marriage is accurate.

Supposing we have the correct time, then we'll also have to look at the-end-of-the-matter 4th house and its ruler.

Venus, ruler of the 4th house is trine Pluto and the Moon's Node is conjunct the IC.

Venus is in an auspicious position and in mutual reception with the Sun.

This may be a marriage 'till death do us part'.

We rectified the horoscope of Kevin Costner using Astrodamus 1.0™.

The annual analysis for 2004, the year of his marriage to Christine, showed the following block:


The annual analysis for his 1978 marriage to Cindy gave the following indications:


What do the Astrodamus predictions further tell about his future ?

The newborn entered the world at 10:30 p.m. at a Los Angeles area hospital. He weighed 7 pounds, 14 ounces and has dark hair.

He also has a son, Liam (born in 1996), with Bridget Rooney, with whom he had a brief relationship following his divorce.

UPDATE February 15, 2009: Kevin Costner and his wife are proud parents of another baby boy.

It's the second son for Costner and Baumgartner and his sixth child.

UPDATE March 19, 2010: Reportedly, Costner's wife Christine Baumgartner is expecting again and she will welcome her third child in June 2010.

It will be his seventh child.