The (Love) Life of Harry, Prince of Wales, Duke of Sussex 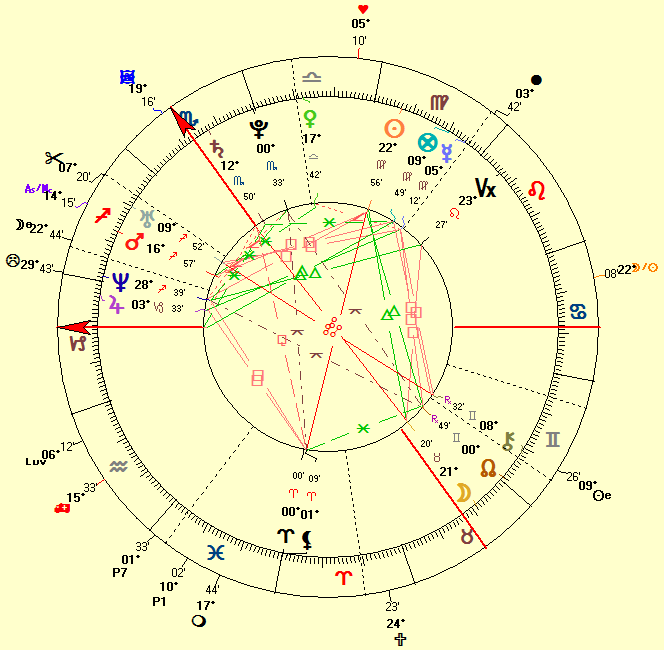 Standouts in the horoscope of Harry, Prince of Wales, Duke of Sussex

Not to overwhelm you with information, we will only assess the horoscope of Prince Harry by looking at the factors that only have some meaning for his love life.

Most planets in the upper half of the horoscope wheel (the Southern hemisphere) indicate a public person.

Therefore, it's often quite difficult to lead a private life because everything comes out eventually and becomes public knowledge sooner or later.

The Sagittarius stellium points to a person who loves to travel, who wants to explore and discover.

Mutable Sagittarius is not a zodiac sign that is home-loving and that sticks in front of the fireside.

Changes of the place, being on the move often and being outdoors is what the life of Prince Harry is about.

Sagittarius is a fire sign and thus active, always eager to learn something and take an active part in a community, society or a group.

The Lunar Nodes and Pluto at a 'critical' degree denote the following:

The Moon is the singleton body (the only planet or body posited in the northern hemisphere, below the horizon that is).

In the 4th house of family and home in the fixed sign Taurus, Prince Harry is a patriot.

He's nature-loving and may enjoy the countryside.

He's moved easily by others, by encounters, by external stimuli.

In the fixed earth sign Taurus, the Moon is much involved in the physical and tangible world.

The love life of Harry, Prince of Wales

As far as is known, Chelsy Davy, was one of his first real girlfriends.

She was the daughter of a Zimbabwe safari company.

In early 2009, it was reported that the pair had parted ways after knowing each other for five years.

In May 2012, Harry was introduced to Cressida Bonas, granddaughter of Edward Curzon, 6th Earl Howe, by his cousin Princess Eugenie.

On April 30, 2014, it was announced that the couple had parted amicably.

Since August 2016 Prince Harry has been in a relationship with American actress Meghan Markle.

Meghan Markle was previously married to Trevor Engelson, a successful manager of screenwriters, actors, novelists, and film directors in Los Angeles, CA on August 16, 2011 and she divorced him on March 7, 2014.

The intimate astrocard analysis between Prince Harry and Meghan Markle

Astrodamus predictions for Harry, Prince of Wales, Duke of Sussex

The news comes after Meghan revealed she suffered a miscarriage July 2020.

Update January 8, 2020: Prince Harry and his wife Meghan Markle intend to step back as ‘senior’ members of the royal family and work to become financially independent, while continuing to fully support Her Majesty the Queen.

They plan to split their time between the UK and North America, the continent of Meghan's birth, as they raise their son, Archie.

Meghan Markle is already 12 weeks along and is expecting a baby in the Spring of 2019.

However, they exchanged vows around 12:13.