The (Love) Life of Cameron Diaz 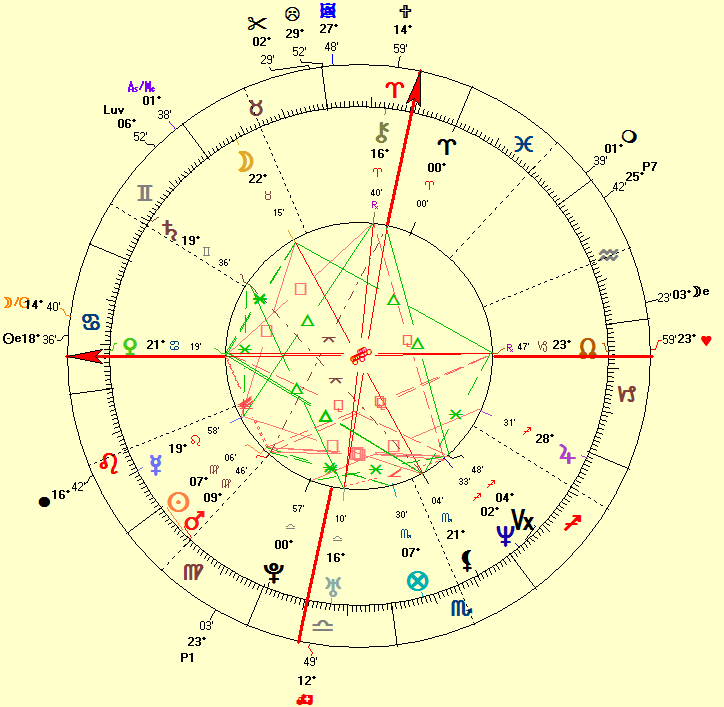 Standouts in the horoscope of Cameron Diaz

Not to overwhelm you with information, we will only assess the horoscope of Cameron Diaz by looking at the factors that only have some meaning for her love life.

An emphasis on the Eastern hemisphere and a predominant 1st Quadrant implies that she is very self-reliant and self-sufficient.

She is steered by her own interests and urges.

Pluto at a "critical degree" (0° Libra) indicates an extreme longing for harmony.

She often feels unloved or rejected but is very popular and hardly makes (open) enemies.

The Venus/Ascendant conjunction, opposite the mean Lunar North Node points to being hurt very easily.

This is the more so because Venus is in vacillating and sensitive Cancer.

She might be pleasure loving, self-indulgent, disarming and unpretentious.

The downside can be a vulnerable nature and being too familiar at times.

People who have Venus angular tend to especially follow an 8 year (and multiples) cyclic life pattern.

Hence, the age of 16 is often a breakthrough year, especially in matters of relationships but also in matters of career or other interests.

At 22° Cancer, the Ascendant suggests she loves an upbeat tempo and  needs things quickly (speed comes before quality).

The Lunar North Node conjunct the 7th house cusp (Descendant) indicates she will sacrifice herself for her partner and make excessive compromises for the partner.

The Moon and Venus and the Sun and Mercury are in mutual reception suggesting she's looking for an ideal and agreeable relationship.

The Moon at 22° Taurus (the sign of Venus) is exactly sextile Venus and the Ascendant Cancer (the sign of the Moon).

In other words, the Moon and Venus are not only in mutual reception but they are also in an exact aspect and additionally, Venus is well disposed by her dispositor.

This is the configuration of a sympathetic personality who loves the dialogue and enjoys sharing ideas and feelings in a cozy environment.

Knowledge and information gathering is important as well as communicating in a harmonious way.

The void-of-course Moon is not an unusual phenomenon and many people are born with it.

It denotes someone who is seemingly devoid of emotions or submerged in emotional drudgery.

It means Cameron Diaz is able to hide her emotions.

Because the Moon also reflects the (early) family life, it suggests she does not really fit into a family (life).

On an inner level she may often feel lonely and even empty.

The love life of Cameron Diaz

The two were unofficially engaged before Christmas Day in 2014.

Cameron Diaz married Benji Madden at her home in Beverly Hills, California, in a Jewish-inspired ceremony on 5 January 2015, after a 17-day engagement, having been introduced seven months earlier by her close friend and now sister-in-law, Nicole Richie.

The marriage came as a reversal for Diaz.

The couple welcomed their daughter Raddix Madden at 1:58 pm on 30 December 2019 in Los Angeles via surrogate pregnancy.