The (Love) Life of Katy Perry 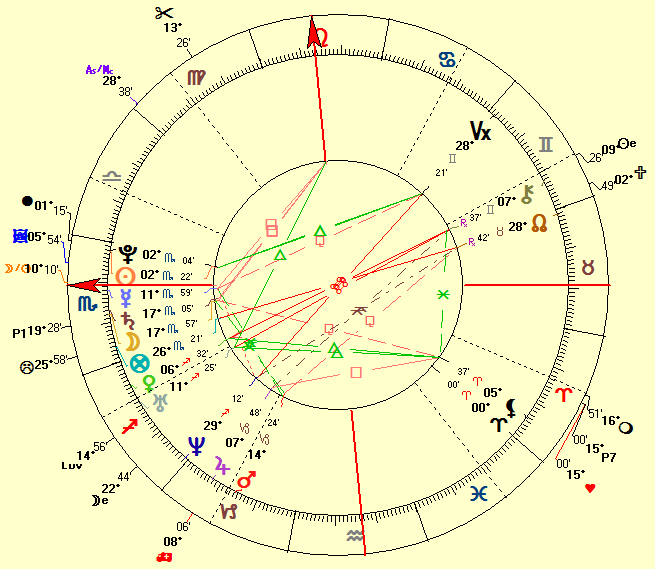 Standouts in the horoscope of Katy Perry

Not to overwhelm you with information, we will only assess the horoscope of Katy Perry by looking at the factors that only have some meaning for her love life.

An emphasis on the 1st Quadrant implies a self-reliant, self-sufficient and self-driven nature.

The 1st Quadrant is the Quadrant of Self, emphasizing the need to live her own life, own urges and desires at her own will.

She needs lots of time on and for herself and does not want to rely on others.

People with a predominant 1st Quarter have it difficult to relate to others because of their self-absorbed agenda and interests.

They are less interested in others, resulting in issues in matters of love and romance.

Most planets posited in water signs and fixed signs indicate that she has a prominent Scorpio nature (Scorpio is a fixed water sign).

Scorpio traits mark her fully and this results in reversals, transformations, interest in mysteries and the like and doing investigative work.

Scorpio (and Pluto) have a much darker side too though because they both rule "the underworld", all that is hidden and that is considered a taboo.

Scorpio and obsessions or compulsive behavior go hand in hand.

The lack of planets or bodies in the air element shows difficulty in letting go, detaching herself from some situations.

She can be single-minded and be very obsessively focused on something, for good or ill.

Mars and Neptune both at a so-called "critical degree" point to the following:

Scorpio often lives in some extremes and goes deep, especially on an emotional level.

Because Scorpio is the sign of reversals, she is able to transform herself profoundly and at times in an extreme way.

She has powerful primal instincts.

A 1st house stellium (representing the Self and the own personality) points to being able to transform and revamp the outer image and Self completely.

Because her Moon is in Scorpio too, she's EXTREMELY secretive about her private life.

The stellium in and around her 1st house denotes a very self-justifying nature and the primal urge to be someone of importance and push through with a single-minded focus and determination.

Scorpio Ascendants and people with a Scorpio stellium are known for their tunnel vision, taking their imagination for reality and going after it in a willful way, for good or ill.

Pluto is the final dispositor in her chart, reinforcing and emphasizing her strong Scorpio nature (Pluto rules Scorpio).

People with a final dispositor in their natal chart are most often self-made and expect others to adjust to them.

Tragedies are part of it as well, mainly because Pluto rules an emotional water sign that may go very deep on an emotional level.

Pluto is always forceful and learns her to master her own urges and drives.

Out of bounds Mars represents the "fighter", a person who is courageous, daring, energetic who does not shun danger.

The downside is learning to handle and manage force, power (abuse) and (repressed) anger.

The Sun, the Moon and the Ascendant in "negative" signs in a female chart imply a very sensual nature and a very strong inner life.

Inner turmoil may mark Katy Perry, which is confirmed and emphasized by the predominant Scorpio and Pluto themes in her natal chart (and especially her Scorpio stellium with the Moon in Scorpio as well).

This reinforces her absorbing and internalizing everything.

The ruler of the 1st house conjunct the Sun suggests very solar traits too in the way she expresses her instinctive urges and drive.

The Sun represents the physical body and when the ruler of the 1st house is conjunct the Sun, Katy Perry wants to show herself physically in a public way.

The very close Sun-Pluto conjunction reinforces, confirms and emphasizes her extremely intense single-mindedness we talked about when discussing the Scorpio stellium in and around her 1st house.

She's very driven but also kind of a loner.

In the natal chart of a female, this conjunction points to the men she is attracted to: men of power, often a bit manipulative, and some naughty bad boys too...

This conjunction is found in natal charts of "achievers."

Issues about control pop up frequently and this conjunction may create feelings of anxiety and guilt.

A Bundle (or Wedge) pattern is an astrological pattern in which all planets in the horoscope wheel are found bunched or bundled very close together within an angle of less than 120°.

This means that all planets are very close and concentrated together indeed !

It's not a common pattern and only found during certain specific short periods of time.

A Bundle pattern suggests Katy Perry draws others to her through her personal magnetism.

People with a Bundle pattern often have many followers.

Because she has a very close or tight Bundle pattern, this astrological configuration also raises a big downside.

People with such a close Bundle pattern very often lack innate natural resources to deal with the problems of life.

She can be self-obsessed with her own capacity and might not seek help or feedback from others (confirmed by the 1st house stellium in Scorpio).

Venus is in a stressful position right in front of the 2nd house cusp.

Whenever a planet is in front of a house cusp, it is told to be in a 12th house meaning of losses, sorrow, solitude, seclusion etc.

When Venus, the planet of relationships is in that position, there are losses, separations, rejections, uncertainties regarding loyalty and/or faithfulness etc.

The love life of Katy Perry

They were dating since September 2009.

Brand announced on December 30, 2011, that they were divorcing, reportedly due to her commercial success and reluctance to engage in activism.

After the marriage ended on July 16, 2012, Katy Perry began a relationship with singer John Mayer in August 2012.

They were seen dining together on August 2, 2012 but late August 2012, they reportedly were no longer dating.

However, on September 1, 2012 they were seen dancing and stealing kisses together.

They were told to be together for the rest of 2012.

On January 30, 2013 John Mayer told reporters he is "quite happy" dating Katy Perry.

In June 2013, they were back on and continuing their "casual" relationship.

Finally, it was revealed that late February 2014, Katy Perry broke up with John Mayer after this 1.5 year on and off relationship.

Katy Perry and Orlando Bloom have been dating on and off (too) since getting together at a Golden Globes after-party in January 2016.

They were spotted together in November and December 2016.

They split in March 2017, issuing a joint statement saying they were “taking respectful, loving space at this time.”

They were spotted back together on holiday in Japan in December 2017, and  were officially back on in February 2018.

Orlando Bloom got engaged to his longtime girlfriend Katy Perry on February 14, 2019.

Interestingly, the July 14, 2019 Solar Eclipse at 10° Cancer is EXACTLY trine Katy Perry's Ascendant and conjunct her 9th house of publicity.

This Solar Eclipse also opposes the point in-between natal Mars and Jupiter so that we expect to hear some more breaking news about this relationship within 6 months counting from the Eclipse date.