The (Love) Life of Will Smith 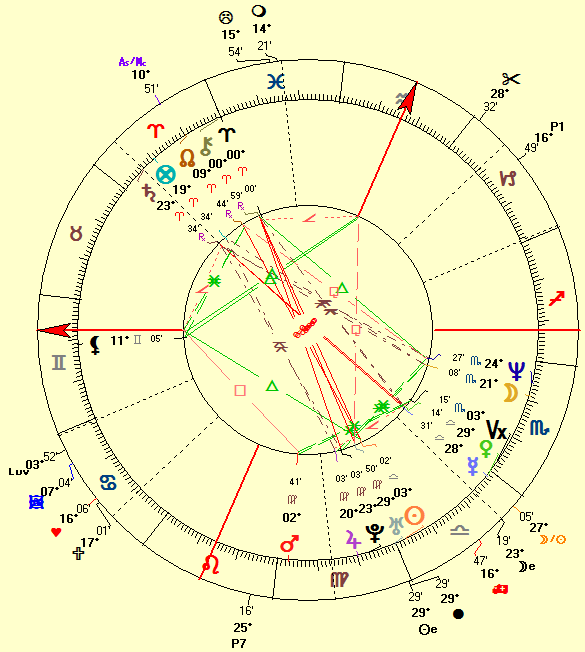 Standouts in the horoscope of Will Smith

Not to overwhelm you with information, we will only assess the horoscope of Will Smith by looking at the factors that only have some meaning for his love life.

An emphasis on the 2nd Quadrant implies that he may fear obligations and duties that may overwhelm him and/or make him dependent.

The 2nd Quadrant especially has to do with the family life, suggesting he values his family life above all.

Venus and Uranus at a "critical degree" (29°) indicate the urge to be a role model (Venus at 29° Libra) and taking a sobering look at his own needs (Uranus at 29° Virgo).

Also, he is very creative and original in his work (Uranus at 29° Virgo), while also standing firm in his own shoes in matters of work (Venus at 29° Libra).

In numerous cases, Venus at 29° Libra denotes a profound change in (love) relationships which manifested in his life by a divorce and 2nd marriage.

Uranus at 29° Virgo too indicates starting over with someone new, confirming the likelihood of another marriage some time in his life.

The stellium in Virgo emphasizes Virgo traits and points to analytic abilities and taking into account the minutest details.

Virgo is a subordinate sign and it loves everything tiny and small.

Virgo can be a workaholic, being always busy.

The 5th house stellium points to creative self-expression, entertainment and having fun.

He wants to shine and laugh.

A stellium in the 5th house of love and children is most often found in the charts of people who have different children.

The 6th house is the house of servitude and because of the stellium that always emphasize the traits that accompany the house meanings, he can be submissive.

This means that he may be a very good and loyal worker (confirmed by the Virgo stellium as well).

He may love (small) animals as well.

In his natal chart, we find the following powerful and predominant connections:

The Ascendant at 7° Gemini indicates a youthful appearance and reflects a popular person.

He absolutely needs a partner and relationships to be meaningful and shine.

He is sociable and wants to be admired and "loved" (even though admiration and love are often mixed up).

Interestingly, more than 70% of all people born with the double signs Gemini or Sagittarius on the Ascendant-Descendant axis of relationships, are divorced and/or are married different times.

This applies to Will Smith too.

Venus as the final dispositor in his chart shows a compliant and conciliatory character or nature.

He cannot stand disharmony nor conflicts and tries to appear sympathetic.

Will Smith needs a beautiful environment with some comfort.

Venus is one of the most powerful planets in his chart, not only because it's the final dispositor but also because it is conjunct Mercury, his Ascendant ruler.

All planets conjunct the Ascendant ruler are extremely important because they tell something about one's drives, primal urges and instinct.

In the natal chart of Will Smith, the position of Venus implies the need to please, being gentle and showing a soft and charming side.

Saturn is the handle planet of a Sling configuration which suggests a defensive nature, someone you cannot get close to and who is suspicious.

He wants power, on his own terms, and he can be very goal-driven.

Saturn as the apex planet of a YOD configuration that incorporates Neptune and Pluto (as well as Jupiter) implies anxiety in his struggle to satisfy his safety urges and being out-of-tune with his ability to structure and define his own identity while growing up.

He may have felt inadequate, insignificant and the more he gets mature, gets self-discipline and fortitude he may undergo a major alteration that evolves into responsibility and attaining a significant and well-respected social position.

He should beware of dark moods though.

The love life of Will Smith

Will Smith was told to never getting divorced... Until Sheree Zampino filed for divorce which gave him the opportunity to be with Jada Pinkett Smith...

Reportedly, Jada Pinkett Smith was crying on her and Will Smith's wedding day because she "never wanted to be married."

For her, it had been a horrible and unpleasant wedding.

Moreover, she was three months pregnant with her and Will's first child...

Her mother pressured her to have a wedding ceremony rather than have a child out of wedlock.

Will Smith, on the other hand, reportedly said he'd had the opposite reaction and couldn't have been happier to marry Pinkett Smith.

The pair now refer to each other as life partners not husband and wife because they realize they are literally with somebody for the rest of their life.

Reportedly, they disciplined themselves to only talk about their feelings once they had calmed down and could have a peaceful conversation about what was bothering them.

They didn't use profanity with each other for 20+ years.

Astrodamus predictions for Will Smith