The (Love) Life of Justin Timberlake 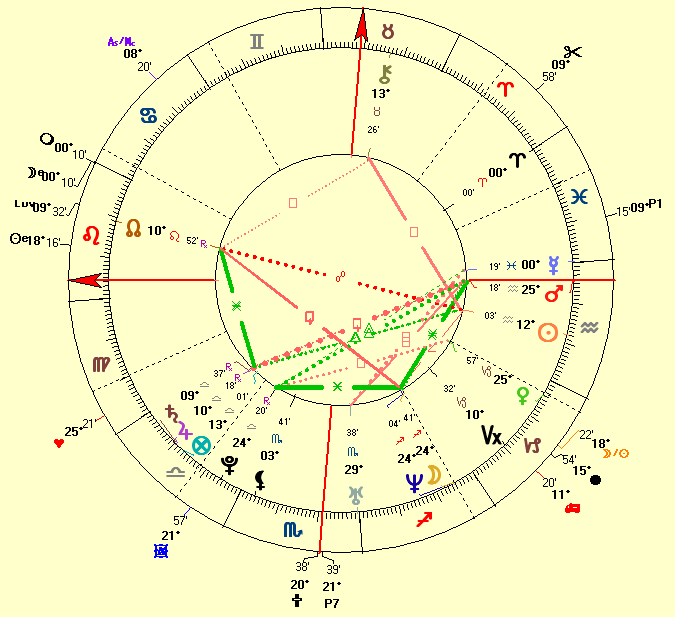 Standouts in the natal chart of Justin Timberlake

As usual we will look at the standouts in his natal chart. After all, that's what will bring us to the essence and predisposition of the person.

Not to overwhelm you with information, we will only assess the horoscope of Justin Timberlake by looking at the factors that only have some meaning for his love life.

In the horoscope of Justin Timberlake we can find the following standouts:

Mercury at a critical degree denotes that Justin Timberlake has a strange kind of imagination -- not always realistic and sometimes weird.

Also, Mercury is in its detriment and squares disruptive and unpredictable Uranus denoting sudden financial expenses (Mercury rules his 2nd house of possessions and income) for pleasure.

He may regret it when he gives (some) money or goods to others (or the partner).

Uranus at a critical degree brings the need for novel ways of expression. Uranus in his 4th house of family and emotional behavior indicates a disruptive background at home or in the family.

No wonder his parents are divorced, which is often the case when Uranus is in the 4th house.

The Moon, Neptune and Pluto at the same degree reveal a very sensitive "soul."

On an inner level he may feel very easily hurt.

This Moon - Neptune - Pluto combo is very often found in the natal charts of people who take more alcohol than necessary.

Also, Neptune and Pluto have something to do with photography and film, so it does not wonder Justin Timberlake has some affinity with all this.

Fame can become quite addicting here.

Moreover, this is a highly accurate indication that Justin Timberlake absolutely longs for and will have children. Keep this in mind!

The outgoing Moon-Neptune conjunction in Sagittarius reveals someone who has a very creative imagination too, the more so because the Moon rules his 12th house and Neptune rules his 8th house.

The fact that the Moon rules his 12th house of sorrow and tears indicates love's sorrow and disappointments in love.

Venus, Mars and the Ascendant at the same degree show a very sensual and highly passionate person. Justin Timberlake goes for passion.

Jupiter and the Moon's North Node at the same degree in a sign indicate fortunate connections and relationships that may bring events to a head, to a crisis of some sort. Jupiter rules his 5th house of creativity, love and children denoting that love connections may bring a crisis into his life.

The cradle pattern (formed by the Ascendant, Mars, Pluto and the Moon/Neptune combo) in a natal chart denotes the unconscious need to bring balance and stability to one's life.

Very often the native builds a wall to prevent external energies to penetrate his being and bring imbalance.

In a psychological way this denotes that Justin Timberlake throws everything he encounters or meets back to the outer world (in the world of psychology this is called projection).

This is an important defence system which may increase the risk of disputes and arguing with the outer world and, especially, a partner.

This is confirmed and even reinforced by the position of Mars in the 7th house of the partner which is always an indication of marital disputes and blaming the partner and other people for everything that does not go or end the way one has envisioned.

It's as if it's always the others who are the culprit.

The native seems not to be willing to accept that he himself may (eventually partially) be the culprit.

The craddle pattern below the horizon is said to act like a sponge, taking in external emotions, feelings and longings.

The own emotions are repressed though and the native needs time alone and tends to reclusion. Reclusion works like a self-healing process here bringing harmony and balance.

The craddle also denotes that Justin Timberlake has a positive outlook on life. Due to disappointments in life he will become wise and insightful.

However, he will be hard to get though as the craddle acts like a screen preventing to upset the (inner) harmony.

The Sun-Moon's South Node (Ketu) conjunctiondenotes a "hot temper" and extreme anger (the Sun is in Aquarius in its detriment).

The South Node can obstruct, darken or negate the Sun (the self) wich means that Justin Timberlake lacks some self-confidence (the more so because the Sun is in the subordinate and servile 6th house).

When we, at Cosmic Technologies analyze horoscopes, we often consult some Astrodamus 1.0™ Reports to know what the future may hold for the native...

Because we did not have a lot of important and timed events in his life, we could not rectify his horoscope.

So, we present the Astrodamus predictions as is.

This said, what has Astrodamus 1.0™ to reveal about the (love) of Justin Timberlake?


Many words and sentences refer to sex, love etc. and it should come as no surprise that the blocks refer to his love affair with Jessica Biel, that started in January 2007...

In March 2011, Timberlake and Biel announced that they had broken up but in late December 2011 Justin Timberlake proposed to Jessica Biel in Montana.

They married on October 19, 2012 at the Borgo Egnazia resort in Fasano, Italy.

How will Justin Timberlake fare according to Astrodamus?

UPDATE July 2020: Reportedly, Justin Timberlake and his wife Jessica Biel have welcomed their second child together, another baby boy, around July 13 or 14, 2020.

UPDATE April 2015: Justin Timberlake and his wife Jessica Biel have welcomed their first child together, baby boy Silas Randall, on April 8, 2015 (in the morning).