The (Love) Life of Priyanka Chopra 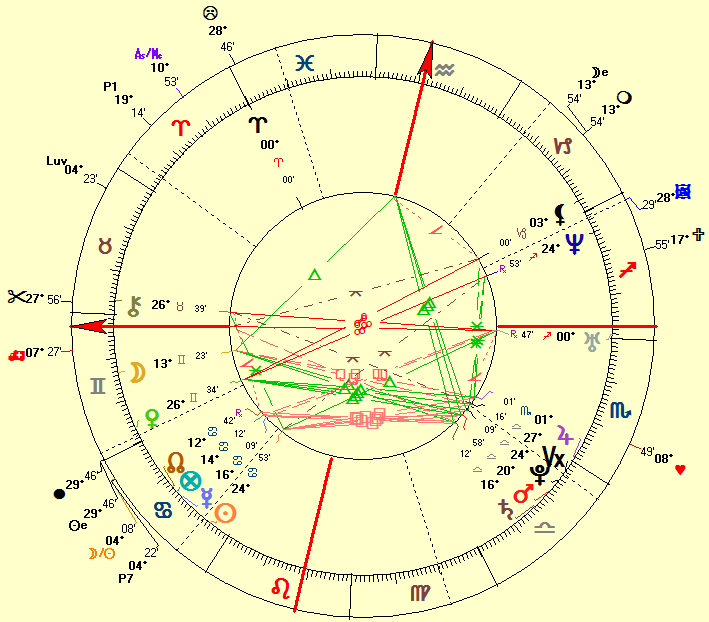 Standouts in the horoscope of Priyanka Chopra

Not to overwhelm you with information, we will only assess the horoscope of Priyanka Chopra by looking at the factors that have some meaning for her love life.

An emphasis on the Northern hemisphere implies that she prefers a private life.

Her personal and family life are most important to her and because the most personal bodies (the Sun, Moon, Mercury and Venus) are posited in the 1st Quadrant of the horoscope wheel (houses 1, 2 and 3), she's self-reliant, self-sufficient and self-made.

Retrograde Uranus at a "critical degree" (0° Sagittarius) and opposite her Ascendant suggests a VERY independent personality.

She's extremely freedom-loving and cannot stand to be pinned down.

0° Sagittarius is a degree of popularity but she may "fly too high" as well (Uranus rules her 10th house of career, status, esteem and reputation).

The Uranus-Ascendant opposition suggests the (suddenly) breaking off of bonds or encounters and meetings to keep her independence.

It's told that this mutual reception is very self-analyzing and thus less dependent on external comments or feedback.

This mutual reception is more detached than the Moon-Mercury aspects and it's likely she cannot be rushed and will analyze everything first.

Priyanka Chopra is reserved and has a self-critical attitude; making she has a very philosophical view of herself and life.

Most planets and bodies are horizontally aligned which suggests a very sociable nature.

She's way more interested in friendships, family gatherings and socializing than in her career, ambitions and achievements.

The lack of planets in the earth element and most planets situated in the air element suggest that she's quite detached, like an observer, and loves communicating.

The Sun, Neptune and Pluto at the same numerical degree in a sign (24°) point to, among others, a tragic disappointment, an extremely sensitive nature or physique, the slowly dissolving health conditions, the highly spiritual nature, the disappearing man or husband, a missing male person in her life (father, husband, brother,...), the allergic reactions to medication or drugs, to go missing, to get under the influence of (an)other(s), to be very impressionable.

The most exact aspects in her chart imply the following:

The love life of Priyanka Chopra

Priyanka has never dated men but only been in relationships with them.

Reportedly, she told that dating as a concept does not exist in India.

She has ended up getting into relationships with the people she met and she usually met people on movie sets.

She made friends but romantically, relationships have always been with people who she met at work.

On September 8, 2016 American singer-actor Nick Jonas sent her a Twitter message in saying that "from a few mutual friends they should meet."

They have been texting since and met at the 2017 Vanity Fair Oscars afterparty.

In May 2017 they met again on different occasions.

They both became engaged July 18, 2018 in a Punjabi Roka ceremony in Mumbai.

Nick Jonas popped the question at midnight after Chopra's birthday in 2018 while in Crete.

Reportedly, Nick has been obsessed with Priyanka since they started dating.

The couple tied the knot during a Western weddingat the Umaid Bhawan Palace, a Taj hotel in Jodhpur, Rajasthan in Chopra’s home country of India on Saturday December 1, 2018.

According to the same report, their child was born just after 8 pm in a San Diego hospital on January 15, 2022.