The (Love) Life of Demi Moore 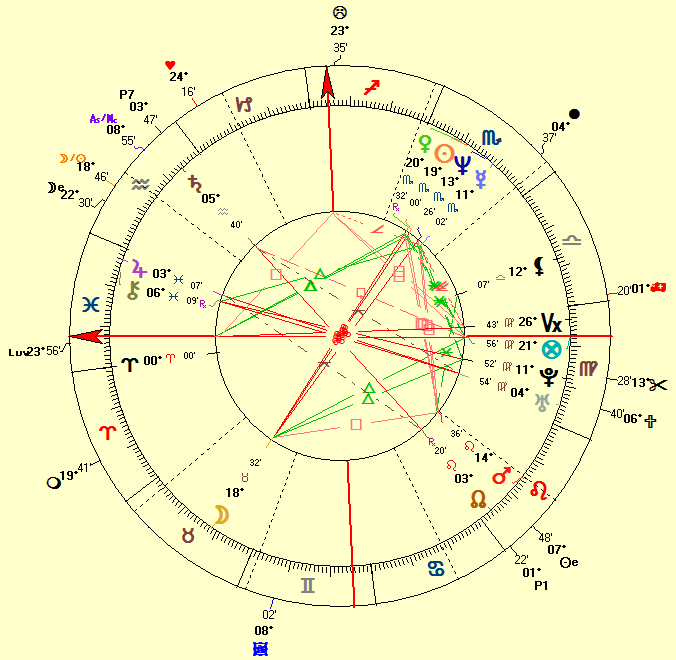 Standouts in the horoscope of Demi Moore

Not to overwhelm you with information, we will only assess the horoscope of Demi Moore by looking at the factors that only have some meaning for her love life.

The Full Moon in fixed signs and fixed houses predisposes the native towards highly stubborn traits.

Also, physical needs need to be met at all cost, otherwise she will suffer.

Hence, Demi Moore has strong and instinctive desires for wealth and comfort.

A Full Moon in Taurus is not thrown off course easily and loves nature.

She's quite inflexible and very set in her ways and dislikes changes.

The powerful Scorpio stellium in the 8th house is highly important because most of her personal points/bodies (the Sun, Mercury, Venus and Neptune) are posited in it.

This stellium reinforces Scorpio traits and points to reversals, intensity, issues about jealousy and primal urges that have to be met at all cost.

Because Scorpio and the 8th house represent shared resources (money and possessions of others), there can be issues with inheritances, loans, taxes, legacies and the like.

Scorpio is a very sensual (and even sexual) zodiac sign and it does not surprise that Demi Moore was a pin-up girl once.

The very exact midpoints in a horoscope are part of the astrological DNA picture of a nativity and they work out the whole life.

The missing air element and the lack of planets in cardinal signs indicate trouble in detaching oneself from situations and being truly objective.

Even though she's not the cerebral type, she can be highly creative.

Compromising may not be easy.

Most of the planets and bodies in fixed water signs reinforce her strong and powerful Scorpio traits reflected by the Scorpio and 8th house stellium.

Power issues are a given.

She is very demanding and wants everything her way in an all-or-nothing way.

The interception of Aries-Libra in the 1st-7th house axis of relationships denotes an early identity complex, a lack of confidence and/or self-esteem that changes when growing older.

Finding a meaningful relationship is not easy and often results in setbacks.

Her relationships tend to lack balance in giving and taking, adjusting the "me" to the "you" (and vice versa).

The rectangle pattern between the Lunar North Node, Jupiter, Saturn and Uranus suggests fanaticism and the longing for increased awareness and raising consciousness.

This can be a very assertive pattern (though not always in sharp a way but rather in forceful a way) that often leads to quarrels and disputes.

The mutual reception between the rulers of the 6th and 8th houses point to issues regarding hygiene and neatness.

This mutual reception represents a microscope actually and she's very analytical and demanding.

She has very high standards and wants everything to be perfect.

In Demi Moore's natal chart, we find many important and predominant connections:

The marriages of Demi Moore

We did not rectify her natal chart though.