The (Love) Life of Meghan Markle 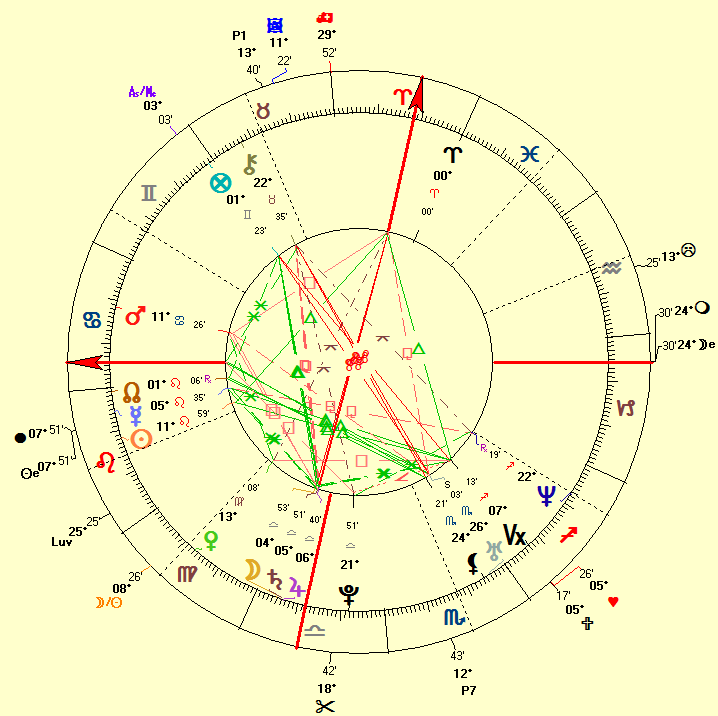 Standouts in the horoscope of Meghan Markle

Not to overwhelm you with information, we will only assess the horoscope of Meghan Markle by looking at the factors that have some meaning for her love life.

An emphasis on the Northern hemisphere implies that she prefers a private life.

Her personal and family life are most important to her and because the most personal bodies (the Sun, Moon, Mercury and Venus) are posited in the 1st Quadrant of the horoscope wheel (houses 1, 2 and 3), she's self-reliant, self-sufficient and self-made.

The Libra stellium suggests an interest in aesthetically beautiful things and vacillating moods.

They prefer equality and justice.

Most planets and bodies are posited in fire signs and in cardinal signs which points to very strong and powerful Aries traits (a cardinal fire sign).

Aside from her Libra traits (because of the Libra stellium), she also has powerful Aries traits (the opposing sign).

Libra and Aries are two opposites, reflecting bipolar traits and characteristics (confirmed by Venus between the Sun and the Moon).

She may feel misunderstood and craves affection.

Hence, inner dissatisfaction and feeling insecure may be noticeable.

She will need to learn to find balance between two opposites, polarities and extremes of whatever kind in her life.

The Sun, the MC and Mars at the same numerical degree in a sign (11°) point to, among others; to be a fighter, to be combative, to be an entrepreneur, to enjoy work, to take responsibility, to be and stand strong, to push through one's desires and urges, to conquer resistance, to show initiative, to be efficient.

Mars rules her MC and squares the MC from the 12th house of secret affairs and hidden enemies.

Clearly, this position of Mars, afflicting it's own house, suggests hidden actions and activities that are meant to damage her career, status and reputation.

All Jupiter-Saturn conjunctions in a natal chart reflect a philosophical way of thinking that is indicative of deep and insightful thinkers who go beyond the mainstream concepts.

With the help of the intuitive Moon, she can easily grasp the need of other people and has lots of common sense and sound judgement.

The wide Ascendant-Pluto square suggests power conflicts with others.

Her self-will may upset her relationships (in the widest sense).

Also, the time she wants to devote to children (Pluto rules her 5th house of children) may result in some relationship issues.

Pluto in the 4th house of domestic life statistically often indicates losing home, breaking up with the family and other intense domestic issues that have a huge emotional impact.

The love life of Meghan Markle

Meghan Markle began a relationship with actor and producer Trevor Engelson in 2004.

Markle's engagement to Prince Harry was announced on 27 November 2017.

She married Prince Harry on 19 May 2018 in Windsor, England.

They exchanged wedding vows and rings beginning at 12:35pm and were declared husband and wife at 12:39pm before a worldwide audience estimated at around two billion people.

Update June 6, 2021: "It is with great joy that Prince Harry and Meghan, The Duke and Duchess of Sussex, welcome their daughter, Lilibet 'Lili' Diana Mountbatten-Windsor, to the world. Lili was born on Friday, June 4 at 11:40 a.m. in the trusted care of the doctors and staff at Santa Barbara Cottage Hospital in Santa Barbara, CA," reads an official announcement.

Both mother and baby are reportedly in good health following the delivery, and the little girl weighs in at 7 lbs 11 oz.

The news comes after Meghan revealed she suffered a miscarriage July 2020.