The (Love) Life of Claudia Schiffer 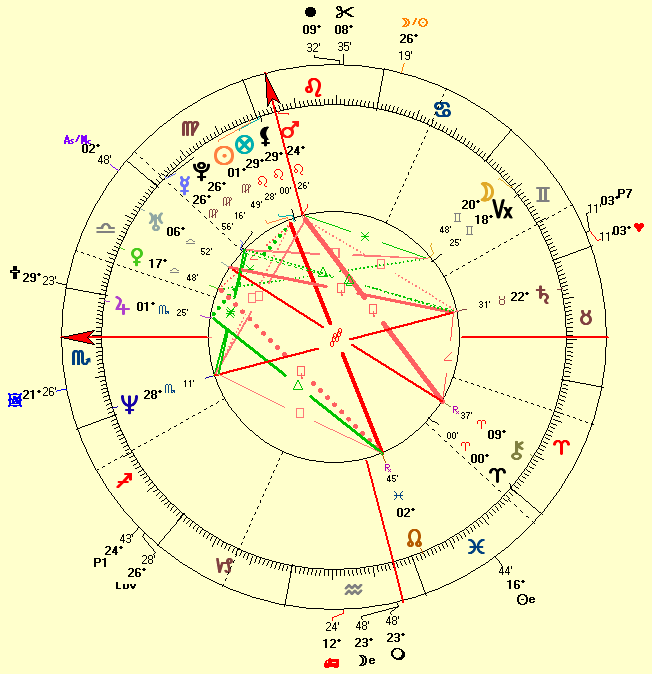 Standouts in the natal chart of Claudia Schiffer

As usual we will look at the standouts in the natal chart of Claudia Schiffer. After all, that's what will bring us to the essence and disposition of the person.

Not to overwhelm you with information, we will only assess the horoscope of Claudia Schiffer by looking at the factors that only have some meaning for her love life.

In the horoscope of Claudia Schiffer we can find the following items:

A strong fourth Quadrant always means a functioning on a grander scale in the outer environment (the society).

The person often acts on the behalf of others and is apt to universalize the own personal interests thru the agency of broader collective situations.

According to the fabulous German astrologer Thomas Ring a strong 4th Quadrant can indicate kind of a compulsive personality.

Culminating Mars on the MC aims toward recognition in the career.

Mars is competitive and brings honor when placed in the royal sign Leo.

This position denotes one who is difficult to pin down.

There is distraction (between different worlds, choices, possibilities etc...), doubt and a lot of travel and change of the place. Most often this position reminds one of a "gipsy".

Saturn in the 7th house of partnerships and (public) encounters indicates power struggles with lovers.

Saturn is the claw, sticking to the other. Saturn wants to be in control.

In this position in the earth sign Taurus, Saturn may be VERY distant.

Most often there is a distance between the partners, whatever the reason may be.

The marriage horoscope of Claudia Schiffer

Click here to learn why Claudia Schiffer married someone from Britain!

Let's take a closer look at this marriage horoscope for a moment (as the exact hour of marriage is unclear -- we only know the marriage was contracted in the afternoon -- we cast the chart with the Sun on the Ascendant). 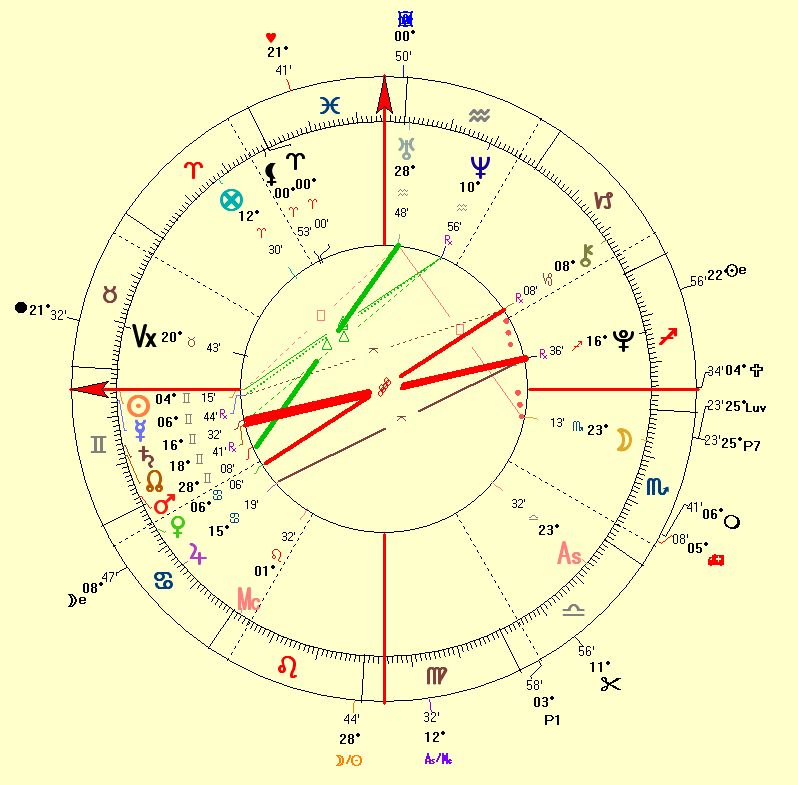 And again, we will only look at what strikes us on that very moment.

In this marriage horoscope we find Jupiter at a critical degree (according to the German astrologer Michael Roscher this degree is of Moon/Saturn signature).

This degree often denotes an amical separation or divorce and a separation through travel.

There is loneliness and a feeling that 'one has to do everything self'.

However, this is not necessarily a bad degree, it can indicate success and influence as well.

There is some connection to money.

In our opinion this degree shows issues that arise in a 12 year cycle.

The Saturn-Pluto opposition denotes loss of property. There is fear of poverty.

Saturn-Pluto is quite a strict, tragic and difficult combination (it reminds us of 9/11).

As this is an aspect between outer planets, external circumstances have an influence on the marriage.

The earth void is an indication of money issues.

The marriage seems completely ungrounded and without boundaries.

There are issues around nurturing and 'feeding' too.

According to R.C. Jansky the Hour-glass Pattern denotes a rather sudden oscillating (ebb and flow) between two poles (groups) pulling the marriage in two directions.

There always seem to be an interpersonal problem, one that involves some adjustment between the partners.

There are fluid (mutable) situations and a lack of fixity.

The marriage is kept loose and fluid, the partners are free to move.

As Saturn might be above the horizon, there may be some external circumstances of Saturn signature that have some influence on the marriage.

When we, at CosmiTec (Cosmic Technologies), analyse horoscopes, we often consult Astrodamus 1.0™ to know what the future may hold for the native...

We rectified the horoscope of Claudia Schiffer using Astrodamus 1.0™.

And during the same time frame we also get this block:

When In Astrodamus 1.0™ two blocks have the same content during the same period, we can be assured that everything will turn out as stated.

We have to blend the different words with one another.

There may be some problems related to her child (the intensity or weighing of the problems is not indicated).

She gave birth to her second child in that time span and we think she might have had a difficult pregnancy and/or delivery.

How will Claudia Schiffer fare according to Astrodamus?

Update June, 2004: Claudia Schiffer reportedly is four months pregnant with her second child according to her father in Bunte magazine.

Claudia Schiffer will be due in November.

In 2004 she and her husband planned to live full-time at their $9.5 million (GBP5 million) Suffolk, England, country mansion, but it seems it turns out differently now... (Source: contactmusic.com March 9, 2005).

Update May 27, 2010: Reportedly, Claudia Schiffer gave birth to a baby girl on Friday May 14, 2010 at London's Portland Hospital "in the early afternoon." The baby is named Cosima Violet Vaughn Drummond.