The (Love) Life of Gerard Butler 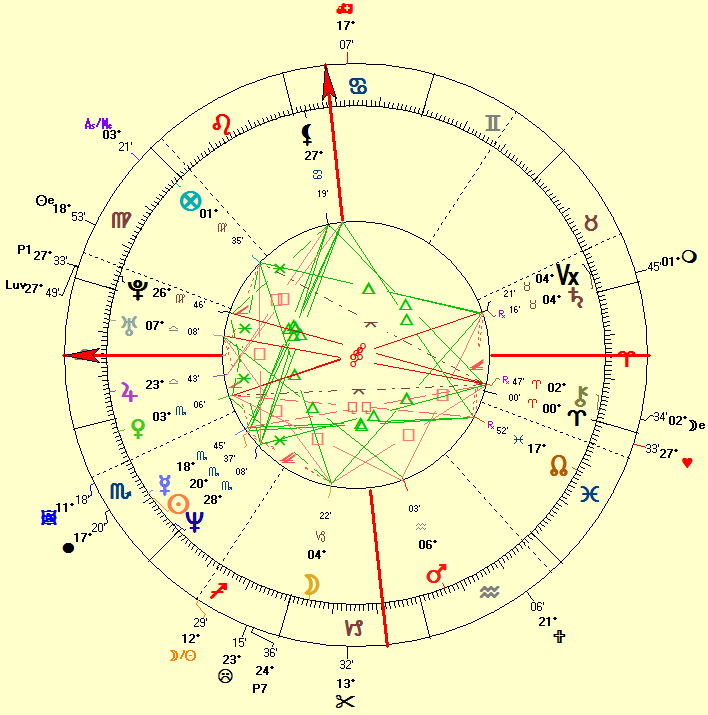 Standouts in the horoscope of Gerard Butler

Not to overwhelm you with information, we will only assess the horoscope of Gerard Butler by looking at the factors that only have some meaning for his love life.

Most planets are situated in water signs and none are found in fire signs.

This suggests a lack of enthusiasm and/or zest.

He may at times feel inadequate, anxious and periodically depressed.

The predominant water element may be related to feelings of dependence.

An emphasis on the Northern and Eastern hemispheres implies a more private personality, preferring solitude or a closed group of people to be around.

Gerard Butler can be irresistibly attracted to someone, but most often for a very short time only.

Knowing when to come close and when to keep a distance in relationships (in the widest sense) can be an issue in his life.

He longs for a peaceful and harmonious environment but may not be able to attain this wish because he's attracted to more fiery personalities who disrupt the harmony.

Inter-personal clashes and conflicts are indicated.

Libra Ascendants tend to represent handsome people and tall men, so it does not wonder many people find him sexy and handsome.

Scorpio often lives in some extremes and because the stellium is also posited in the 2nd house, he may be quite robust and shrewd.

Emotions may run high and he may get swayed easily by his emotions, which may bring quite some problems.

The stellium in the 2nd house, the most material and inert house as well, denotes financial interests and acquiring possessions and a focus on a comfortable and secure living.

Love and money may be intertwined and bring huge complications in life.

Secret love affairs are a given, as well as secret financial deals.

In Gerard Butler's natal chart, we find the following powerful and predominant connections:

Mercury and Pluto in mutual reception denote a single-minded attitude and intent.

He wants to achieve his goals in a willful way.

He may be picky and a bit obsessed.

The (released) T-square in fixed signs points to some arrogant and very head-strong traits.

Gerard Butler has tons of determination, vital energy resources and might not stand external pressure.

In Aquarius, apex Mars suggests single-minded persistence (confirmed by the 2nd house stellium in fixed Scorpio) in acting out his calculated urges.

In matters of love and romance, his willfulness may bring some issues though.

The fact that this T-square is released by the emotional Moon in the 3rd house is auspicious because the tension between the opposition aspect has an outlet (in talking, moving or changing the place and being restless, among others...).

However, he should beware of harsh disputes and jealousy resulting in separation.

The love life of Gerard Butler

Gerard Butler has been romantically linked to, among others, Jennifer Aniston, Jessica Biel and Madalina Ghenea (till 2013).

Since 2014 he has a toggle relationship (on-off-on-off...) with Morgan Brown, an interior designer and former model.

Reportedly, late 2018 Gerard was looking to move in with his on/off girlfriend.

He'd love to have one or two kids and wants to be more run by his personal life than his career, as he reportedly told in September 2018.

Interestingly, her Mars is conjunct his Moon and her Moon MIGHT be in the same sign as (even conjunct) his Mars.

Moreover, when looking at the chart comparison they both share a T-square: her Venus and Lunar North Node build the apex point of this pattern that also involves his Sun and Mercury and her Saturn.

This T-square suggests separations (and this may clarify the toggle bond) and living a detached or distant love bond, among others.

Also know that their personal planets (Sun, Moon, Mercury and Venus) are in clashing or incompatible zodiac signs (but after all, it's the house positions that still prevail and because we don't have her time of birth, we can only say they have totally a different personality).