The (Love) Life of Brad Pitt 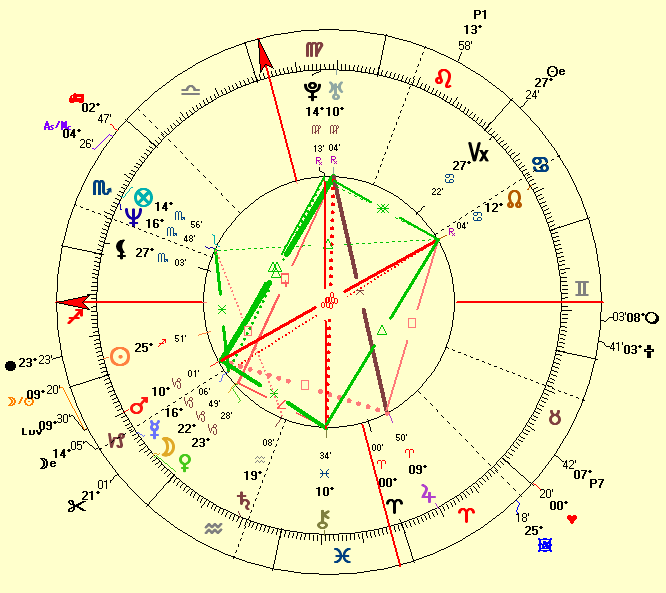 Standouts in the horoscope of Brad Pitt

As usual we will look at the standouts in his natal chart. After all, that's what will bring us to the essence and disposition of the person.

Not to overwhelm you with information, we will only assess the horoscope of Brad Pitt by looking at the factors that only have some meaning for his love life.

In the horoscope of Brad Pitt we can find the following standouts:

A strong first Quadrant brings a self-sufficient, self-reliant personality who is quite set in his ways.

Brad Pitt needs time for himself, to develop himself.

This configuration is often found in horoscopes of people who are able to live alone and often go their own way too.

Individualistic tendencies (confirmed by the following item: the partile Mars-Uranus trine). Brad Pitt seems to have no patience.

The partile Mars-Uranus aspect in Earth signs aims toward (material) gain and freedom.

As long as he can acquire material or tangible goods he will feel free.

This Mars-Uranus trine is quite an impatient, adventurous and pioneering combination.

The exact Mercury-Neptune sextile reveals quite some (subconscious) camouflage techniques in his way of communicating.

He will not reveal what's on his mind. He'd rather spread some fog...

A stellium in the formal sign Capricorn shows an ambitious personality.

Brad Pitt wants to elevate himself from the mass, wants by any means to be of importance in society and he craves social prestige.

Capricorn can be very business-like, however. Even (or especially so) in matters of love. Brad Pitt might be too ambitious.

Capricorn sets limits for others (trying to "manage" or rule the other or the partner).

At last, this may become too a restricting burden for the other or the partner.

The marriage horoscope of Brad Pitt

Curious as we are, let's take a look at his Marriage Graph for 2000 first. 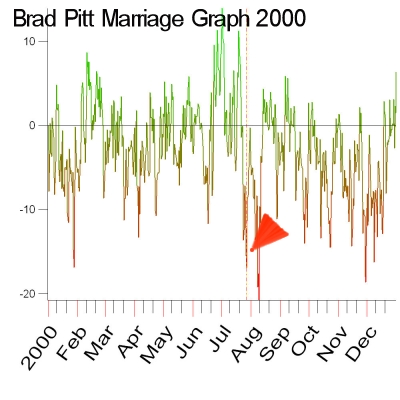 Well now, that was definitvely not a good day to marry! See how this red graph peaks down around the end of July... 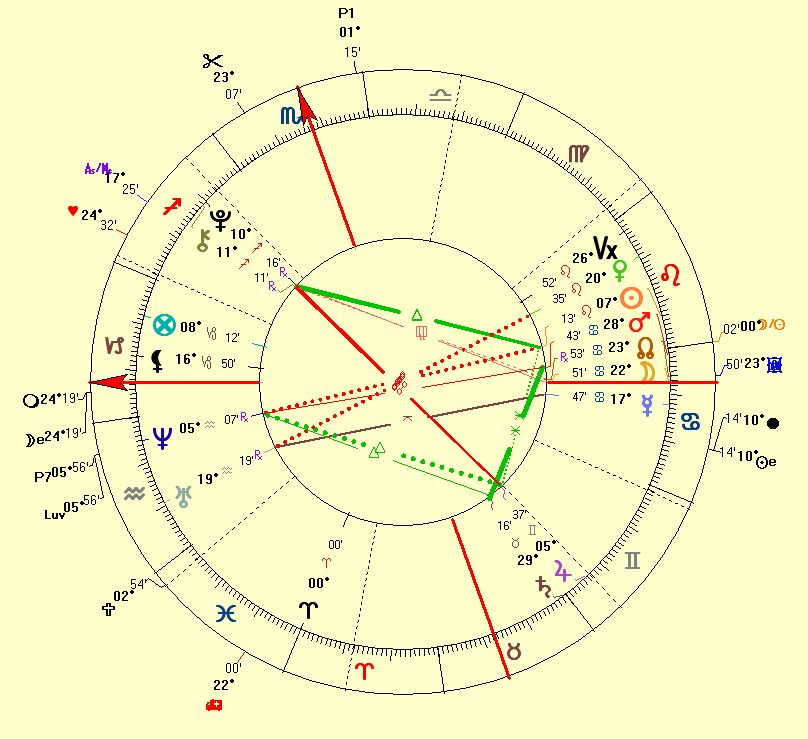 In this marriage horoscope we find Saturn, ruler of the Ascendant, at a critical degree. 29 degrees always point to endings.

This borderline position brings Saturn in a transitional void before entering Gemini.

Also, 29° Taurus is widely known as 'The Weeping Sisters', bringing something to weep about. In a marriage horoscope, this constellation should be avoided at all cost.

The Moon-Ascendant opposition, the Moon strong in its own sign Cancer, is very fluctuating and inconsistent.

This position is not fortright and direct but extremely moody and represents hidden issues.

Venus opposes disruptive Uranus. Uranus is very strong in its own sign, though intercepted. Venus-Uranus is a very magnetic combination, bringing a sudden irresistible (sexual) attraction.

Unfortunately, Uranus is way too fickle and inconsistent to bring a lasting marriage, especially when both planets build an opposition (oppositions often indicate a separation and something that is out of reach, out of your control).

Intercepted Uranus gets frustrated when not able to be original and creative.

The intercepted Sun is the final dispositor of the marriage horoscope and very strong in its own sign.

There is frustration, a void or lack of "creative self-expression" in this marriage.

Even when the Sun is placed in its own sign, the interception is more powerful, hindering the Sun's expression.

The Cancer stellium (the Moon, Mercury, Mars and the North Node are in Cancer) is just opposite Brad Pitt's Capricorn stellium.

The opposition brings some awareness and attraction of something out of reach.

The Cancer stellium (together with the dominant Moon) is a most sensitive and moody configuration.

It's a very family-centered configuration.

We rectified the horoscope of Brad Pitt using Astrodamus 1.0™ and entered the following events that seem to be of importance:

Astrodamus 1.0™ gave the following indications and predictions for his 2000 marriage year:

Also, we can find the following block:

When In Astrodamus 1.0™ two blocks have the same content ("favorable change related to self") during the same period, we can be assured that everything will turn out as stated.

We have to blend the different words with one another.

No doubt about it that Astrodamus predicted Brad Pitt's marriage.

We know that Jennifer Aniston filed for divorce from Brad Pitt on Friday March 25, 2005.

So, what has Astrodamus to tell us about his future love life?

Update January 11, 2006: after a lot of rumors, Angelina Jolie has confirmed that she and Brad Pitt are expecting!

Update June 5, 2006: Angelina Jolie delivered a girl, named Shiloh Nouvel, via cesarean section at the Cottage Medi-Clinic Hospital in the coastal town of Swakopmund, Namibia in the evening/night of May 27, 2006.

However, some reports say the girl is born at the Welwitschia Clinic in Walvis Bay...

Angelina Jolie had opted for surgery because the baby girl, who weighed in at seven pounds, was in a breech position.

Update April 13, 2012: Reportedly, Angelina Jolie and Brad Pitt are engaged. There is no marriage date set though.

Update August 28, 2014: Reportedly, Brad Pitt and Angelina Jolie were secretly married in a private ceremony attended by family and friends at their Château Miraval home in Correns (Var area), France.

In advance of the nondenominational civil ceremony, Brad Pitt and Angelina Jolie also obtained a marriage license from a local California judge.

The judge also conducted the ceremony in France.

This is a second marriage for Brad Pitt – he was divorced from Jennifer Aniston in 2005 – and a third for Angelina Jolie. She was previously married to the actors Jonny Lee Miller and Billy Bob Thornton.

The couple began leasing Chateau Miraval in 2008 and bought it three years later.

The sprawling property has its own vineyards and a tiny chapel in the grounds with standing room for around 20 people.

The actor and director cited irreconcilable differences as the cause for the split.

Jolie has reportedly asked for physical custody of their six children, with Pitt allowed visitation rights.

She is not asking for spousal support.

The date of separation is listed as 15 September 2016.

This can be a highly threatening pattern.

This fully clarifies why both partners separate just now: 10° in a sign is for both a highly sensitive and turbulent degree.