The (Love) Life of Billie Eilish 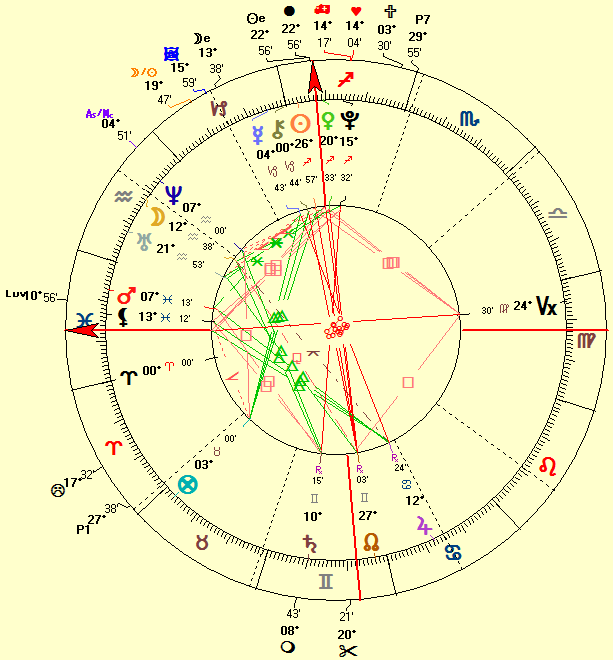 Standouts in the horoscope of Billie Eilish

Not to overwhelm you with information, we will only assess the horoscope of Billie Eilish by looking at the factors that have some meaning for her love life.

An emphasis on the 4th Quadrant implies that her life is especially influenced, steered, by society and she has a huge interest in a community or in society, at large.

A predominant 4th Quadrant is often found in natal charts of people who are compulsive-obsessive.

Venus on top of the natal chart always indicates the principle of "love me !"

Venus detests conflicts and gives in easily to keep harmony and peace.

This points to some difficulty being assertive and being straightforward in a relationship (this is confirmed by the position of assertive Mars in introvert Pisces in the 12th house of sacrifice and undoing).

Chances are Billie does not disclose everything she does.

Culminating Venus is in-between Pluto and the Sun, suggesting an innovative spirit with tons of inspiration.

The downside is a cerebral attitude/mentality (confirmed by the mutual reception between Mercury and Saturn and the powerful Mercury/Saturn affinity), indicating a lack of "feeling" affections.

There configuration points to melancholy and a cool behavior.

She may be solitary and marriage should not be on her agenda (marriage is a construct after all and never the purpose of or goal in life; self-development is !).

The Sun-MC conjunction and the Sun opposite the Lunar North Node denote being in the spotlight, physically.

The Sun represents the physical body and with a culminating Sun, she wants to shine and show herself publicly.

She wants to be seen.

The opposition with the Lunar North Node suggests it's very natural for her to be in the spotlight and "shine brightly."

Some may find her a bit vain and self-sufficient because of this.

She loves expressing her creativity publicly.

Most planets in fire signs and in mutable signs represent predominant Sagittarius traits.

Sagittarians always have something to tell, want to propagate something, want to send out a message to a wider audience or to the world.

They love travelling and have high hopes and high ideals.

Not all their ideals materialize or manifest though (not all their arrows will hit target).

The stellium in Aquarius and in Sagittarius reinforce the predominant Sagittarius traits and add some unconventional Aquarian features to it.

She is very humanitarian and innovative and original.

Billie is able to blend wisdom and insight with vision and independence.

Both planets can bring some sad or somber mood though.

She is always on the guard and tends to be fixed in her thinking.

This mutual reception denotes "rationalization" and is found in natal charts of good listeners.

The Moon-Jupiter inconjunct suggests a generous and supportive nature.

There may be difficulty in expressing feelings appropriately though, as well as an excessive need to win approval.

Poor judgement might bring relationship issues (in the widest sense) and she will have to learn to attract reliable people instead of those who want to "consume" her.

She may attract people who want to betray her or who are too fickle.

Mercury is out of bounds, i.e. beyond the maximum declination of the ecliptic.

According to the fabulous research by Kt Boehrer, this Mercury's position denotes great curiosity and a talent for the acquisition of knowledge.

The love life of Billie Eilish

Reportedly, Billie Eilish did not like her first kiss from a boyfriend, Henry Whitford, on February 13, 2016.

She's dealt with rejection and unrequited love from a young age already.

Reportedly, she was obsessed with Justin Bieber for several years and in love with him before her own rise to fame.

Billie has since become sort of friends with Bieber.

Billie is still single and might not have the time for a date because of her many ongoing tours (2019-2020).