The (Love) Life of Jennifer Aniston 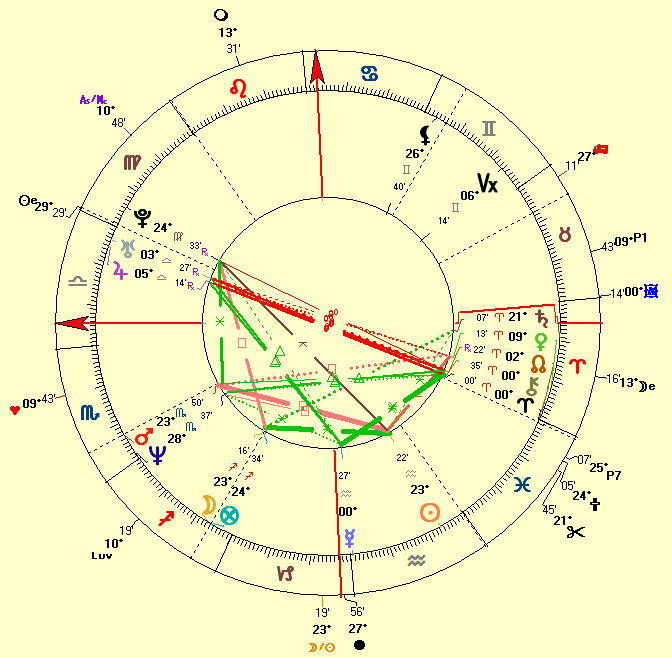 Standouts in the natal chart of Jennifer Aniston

In short, we are looking for factors that are out of balance.

Not to overwhelm you with information, we will only assess the horoscope of Jennifer Aniston by looking at the factors that only have some meaning for her love life.

In the horoscope of Jennifer Aniston we can find the following items:

The final dispositor in the horoscope is the planet that all other points and planets have to submit too.

In other words, the final dispositor is the boss who has the last word.

When Mars is the final dispositor, there are many impulses and compulsive desires and a lot of focus, the more so because Mars is posited in the fixed 2nd house in the fixed water sign Scorpio.

The focus is on accumulating material goods for the own well-being, for the own ego (especially when relationships do not work out as wished for).

Also, she can be seduced by wealth and luxury!

Any planet at 0° in any sign, shows a new beginning.

0° Aquarius can be a shocking and distressing degree, though, bringing (sudden) separation, divorce and sudden change of opinion and re-thinking (this is especially applicable if Mercury, the communicator or messenger, is right on this degree).

There is nervous tension and sudden leave-taking.

The Moon, the Sun and Mars all in an exact aspect denote the compulsive desire to be busy, a powerful drive to accomplish things and -- in the horoscope of a woman -- a deep rooted child's wish.

Pluto exact semi-sextile the Ascendant signifies a rather compulsive, forceful and even manipulative character. Jennifer Aniston seems to want everything HER way.

She can manage quite a heavy workload.

When all planets above the horizon are retrograde, there is a profound search for personal meaning through identification with the social sphere.

Chances are, however, that Jennifer Aniston may find little fulfillment in social life.

(Personal) planets and points conjunct important Fixed Stars are of the utmost importance.

The marriage horoscope of Jennifer Aniston

The couple separated January 7, 2005 after 4 1/2 years of marriage. Filed for divorce on March 25, 2005, citing irreconcilable differences.

Their divorce was finalized on October 2, 2005.

Blaming her unhappy childhood for the problems in her own marriage to Brad Pitt, Jennifer Aniston also admitted that her negative attitude played a role in the breakdown of their marriage.

We delineated her marriage horoscope when we discussed and delineated Brad Pitt's love life, so we are not going to repeat it all again here.

Instead you can below find her Marriage Graph for 2000.

The red arrow points to the date of marriage and that date is a very mediocre one.

Consider all the other "best dates" (the most elevated green ones) that were so much more favorable. 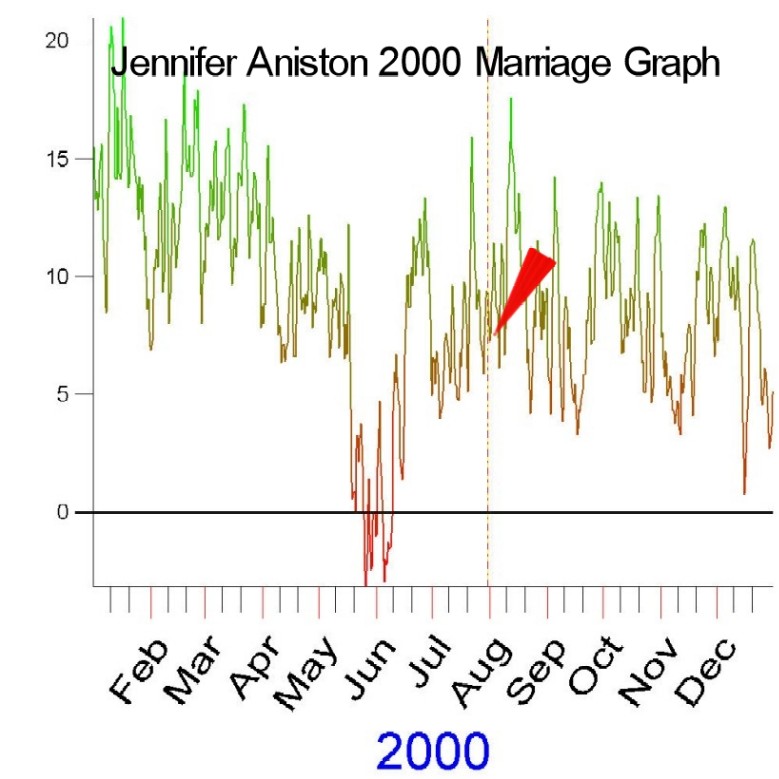 They met in the summer of 2005 while filming a romantic comedy "The Break-Up" and officially confirmed October 2005 they were a couple.

When we, at Cosmic Technologies, analyze horoscopes we often consult Astrodamus 1.0™ to know what the future may hold for the native...

We rectified her horoscope first with the following events:

We used this rectified time to let Astrodamus 1.0™ list the following predictions:

Her love affair with Vince clearly shows up here.

Around May 2006, Jennifer Aniston and Vince Vaughn have reportedly snapped up a luxurious $12 million pad in the Chicago suburb where Vince grew up.

They will settle down there and leave Hollywood to hopefully live a more private life.

How will Jennifer Aniston fare according to Astrodamus?

Update February 15, 2018: Reportedly, Jennifer Aniston and Justin Theroux confirmed to have separated after two years of marriage -- and seven years together overall.

Jennifer is more comfortable in Los Angeles with her close-knit group of friends.

As they spent more and more time apart, their problems became bigger. He’s very focused on himself and his craft. And Jen is not the easygoing girl she wants the public to think she is. She isn’t as happy, and she is far more complicated, friends say.

Update August 6, 2015: Reportedly, Jennifer Aniston and Justin Theroux were married Wednesday August 5, 2015 in the evening in a top-secret ceremony at their Bel Air mansion, Los Angeles.

The couple disguised the event as an elaborate house party complete with a cake featuring puppet versions of themselves.

A pastor carrying a Bible was also seen walking into the home.

The ultra private pair went all out to keep the big event under wraps hiding anything related to the wedding set up in a big shed on the property.

Theroux popped the question on his 41st birthday.