The (Love) Life of Leonardo DiCaprio 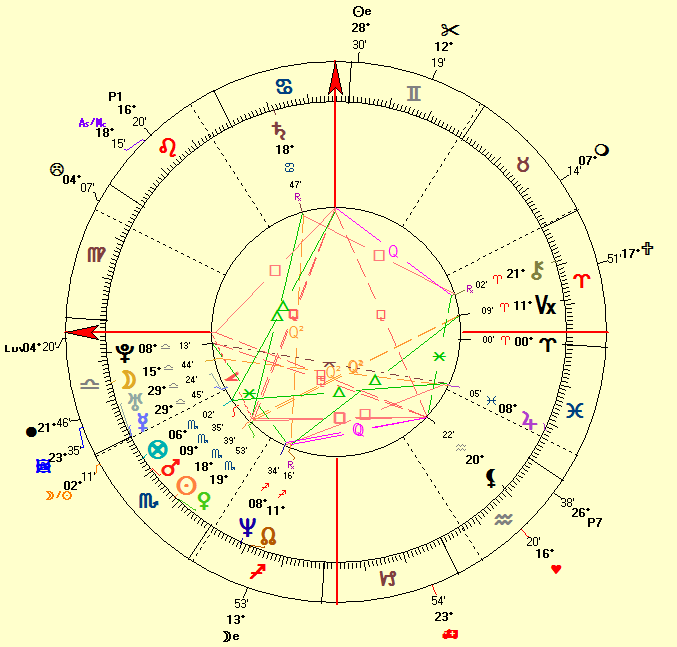 Standouts in the horoscope of Leonardo DiCaprio

Not to overwhelm you with information, we will only assess the horoscope of Leonardo DiCaprio by looking at the factors that only have some meaning for his love life.

Jupiter, Neptune and Pluto at the same numerical degree in a sign mark spendthrift, huge expenses, bankruptcy, addictions, to be betrayed, seduction, Universal Love, to be very religious and/or spiritual, to be peaceful, to be euforic and happy.

Most planets in the 1st Quadrant indicate a self-sufficient, self-reliant nature.

People with a predominant 1st Quadrant need lots of time for themselves, to develop themselves.

Their main interest is their own evolution.

Though others may find this to be selfish, it's part of what life is about: self-development!

The Libra stellium points to a person who needs lots of harmony and a beautiful environment.

He is sociable but in a detached way (Libra is still an air sign!).

Reportedly, Leonardo has been enamored with models for pretty much his entire acting career which fits this stellium beautifully!

A stellium in the 1st house refers to a very sensual and aesthetically beautiful person.

The Scorpio stellium is all about intensity and charisma.

No wonder he is told to have an intense emotional acting style...

A 2nd house stellium refers to a very materialistic person.

Material gain and wealth describe his self-worth also and the more wealth, the more his self-esteem increases.

Both Libra and Scorpio are sensual and even sexual signs denoting an avid interest in physical pleasures, the more so when these signs can be found in the 1st Quadrant of the horoscope wheel (which represents the personal life and physical body).

In Leonardo DiCaprio's natal chart, we find many important and predominant connections:

The Moon, Mercury and Uranus at a 'critical' degree denote the following:

Neptune and the North Node of the Moon are conjunct which suggests Universal Love.

Leonardo is more a spiritual being who advocates spiritual love rather than interpersonal love.

He wants to sacrifice for other people, the weaker ones and those who need help and support.

Indeed, this is a very humanitarian and helpful aspect and he's very much interested in his own spiritual development also.

Reportedly, Leonardo DiCaprio is passionate about environmental and humanitarian causes, having donated to numerous causes.

Saturn is the singleton planet (the only planet posited in the southern hemisphere, above the horizon that is).

This pattern signifies the willingness to sacrifice short-term goals for long-term goals.

He's not the person you can get 'close to' because he's very suspicious and defensive.

In many ways, he wants everything to go his very own way.

The love life of Leonardo DiCaprio

His first high profile girlfriend was rumored to be actress Brittany Daniel in the mid 1990s.

Reportedly, Leonardo DiCaprio then went out with model and actress Kristen Zang for two years.

He then dated quite some models, including Amber Valletta, Eva Herzigova and Gisele Bündchen, who he went out with for about five years.

Conflicting schedules and divergent careers are told to be the cause of the break-up with Gisele Bündchen.

After Gisele Bündchen, Leonardo DiCaprio went with the Israeli model Angel Bar Rafaeli on and off from 2005 to 2011.

In 2011 he also dated Blake Lively for five months.

Since the end of 2017 his girlfriend is model and actress Camila Morrone.

In 2020 they were still told to be together.