The (Love) Life of Britney Spears 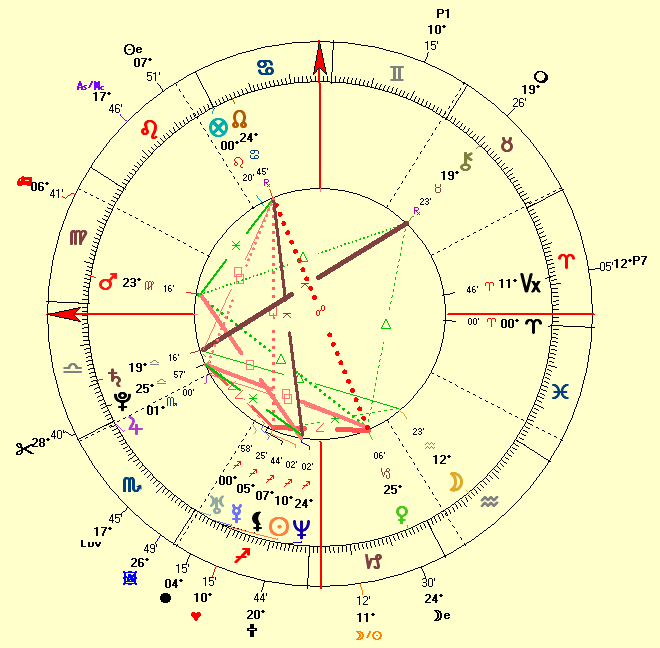 Standouts in the horoscope of Britney Spears

Not to overwhelm you with information, we will only assess the horoscope of Britney Spears by looking at the factors that only have some meaning for her love life.

In the horoscope of Britney Spears we can find the following standouts:

A strong first Quadrant always means that the native (i.c. Britney Spears) has a lot of will-power and is self-sufficient.

She is self-reliant and needs time for herself to develop properly.

Any planet at 0° in any sign, shows a new beginning. 0° Sagittarius is quite a positive (and very public) degree.

Uranus too, is quite a public planet and may bring windfalls at this degree area.

A Mars-Neptune square shows a lack of energy and an aversion to or dissatisfaction with the work as well.

Venus (ruler of the first house) in an exact square to Pluto makes very sensual, at times even lustful and denotes sexual urges that are not always under control.

A lot of physical changes (different looks) are indicated too.

The Sun-Pluto aspect too is such a powerful configuration showing some power struggles in the life of Britney Spears.

When a planet is in the same degree as the mean North Node, matters can become critical.

There may be a crisis.

Considering the Node and Neptune act together on the same degree, we get a misty and disappointing combination.

Neptune brings a lot of confusion, (dis)illusion, misunderstanding or intrigue to the connections of Britney Spears.

In the 45° dial/list, the following midpoints are exact:

When Venus opposes the Lunar North Node, it's told to rely too much on others by being a bit "lazy."

She might need others, a partner, a manager to keep her going.

It confirms that she rather avoids conflicts as an escape mechanism which is part of her laziness in some matters.

Venus (ruler of the 1st house) exactly opposite the Moon's Node has also to do with leave-taking, separation from loved ones (for whatever reason).

The stellium (more than 3 planets) in Sagittarius (the Sun, Mercury, Uranus and Neptune are in that sign) in the 3rd house brings the focus foremost on travel and trips (being on the move often).

Sagittarius is idealistic, expansive, buoyant and has lots of strings to their bow.

As a mutable sign (in a mutable house), lots of changes and detours are part of her life.

Because Sagittarius is a double sign, she can be sloppy at times.

The love life of Britney Spears

Reportedly, it was actually Jones whom she lost her virginity to, not her future boyfriend Justin Timberlake.

Britney's first serious relationship was with her former Mickey Mouse Club co-star Justin Timberlake who she dated between 1998–2002.

In 2002, after her break-up with Justin, she reportedly moved on with choreographer Wade Robson.

It was actually rumored that Wade was the real reason that Justin and Britney split.

After the break-up with Robson, Fred Durst claimed that he dated Britney Spears in 2003, though she denied that they ever had a relationship.

The couple spent time together when working on songs for Britney's new album.

Britney was also rumored around 2003 to have dated Jared Leto, but he never confirmed the alleged romance and she denied that they were ever an item.

She told they were just "really good friends."

In the same year of 2003, Britney Spears and actor Colin Farrell were seen kissing at the premiere of his film The Recruit, where they also walked the red carpet.

Britney's first marriage was to Jason Alexander in the early morning hours on January 3, 2004.

Jason had been her friend since childhood.

Their marriage was annulled 55 hours later.

Britney Spears met Kevin Federline, a backup dancer, after that and eventually married, with two sons: Sean, 16, and Jayden, 15.

The couple divorced in 2007, and it was her struggles with custody that reportedly factored into the creation of her conservatorship.

After her divorce in 2007, Britney Spears got together with music producer J. R. Rotem.

In the same year of 2007, she began dating male model Isaac Cohen.

Their breakup was described as "amicable," and Cohen later said of their relationship: "By the time I met Britney she was burnt out. She knew she had been drinking and partying as a way to try to banish the bad stuff from her life."

Britney Spears reportedly met singer–songwriter Howie Day in 2007 while both were at the Promises rehab center in Malibu.

In 2007-2008 she also began dating paparazzo Adnan Ghalib, despite the fact that he had long been on her tail hunting for the perfect photo.

From 2009 till 2013, Britney Spears has her longest relationship with her former agent, Jason Trawick.

Britney and David Lucado began dating shortly after her split from Trawick in 2013, though the relationship only lasted about a year.

Since October 2016, she dated Sam Asghari, an aspiring actor.

We have not rectified the horoscope of Britney Spears, as we have no life events that could be used.

As you can see, Britney Spears will have a marvelous 2004, being more popular than ever.

Her love life will start to blossom (again).

In 2004, Britney Spears is said to be engaged to marry her dancer-boyfriend Kevin Federline.

News of the engagement was confirmed by Spears' personal publicist and her label, Jive Records -- click here to take a look at the wedding and marriage horoscopes of Britney Spears --.

How will Britney Spears fare according to Astrodamus?

Update June 2004: Britney Spears is said to be engaged to marry her dancer-boyfriend Kevin Federline.

News of the engagement was confirmed by Spears' personal publicist and her label, Jive Records -- click here to take a look at the different 2004 wedding and marriage horoscopes of Britneys Spears).

According to our calculations the baby will be delivered around October 2, 2005.

More information and details will be published in our Issue #005 of our monthly Love Letter.

Why don't you sign up to our Love Letter? It's FREE.

Update December 16, 2011: It is confirmed that Britney Spears is engaged with her former agent, Jason Trawick since December 15.

The pair has been together since early 2009.

Update January 11, 2013: Britney Spears has announced her breakup and one-year engagement with Jason Trawick. They intend to remain friends.

Update September 12, 2021: Britney Spears has announced on Instagram that she and her longtime boyfriend Sam Asghari got engaged.

She first met the actor-fitness enthusiast in 2016 on the set of the “Toxic.”

Update April 11, 2022: Britney Spears has announced on Instagram that she and her longtime boyfriend Sam Asghari are expecting.

This will be her third child.

Update May 15, 2022: Britney Spears and Sam Asghari in a joined statement on Instagram announced the loss of her baby early in the pregnancy.

This is the 3rd marriage for Britney Spears, the 1st for Sam.