The Britney Spears
Wedding Horoscopes
An Analysis of Her 2004 Marriages

Let's discuss the Britney Spears wedding horoscopes of 2004 for a moment now.

The delineation of her natal chart and some general future love forecasts are discussed on our Britney Spears page.

On this page, we will assess her 2004 marriage horoscopes (you may recall that Britney got married twice in 2004).

So let's take a look at the following horoscopes:

The sham marriage of Britney Spears

Let's take a closer look at this Britney Spears wedding horoscope for a moment. 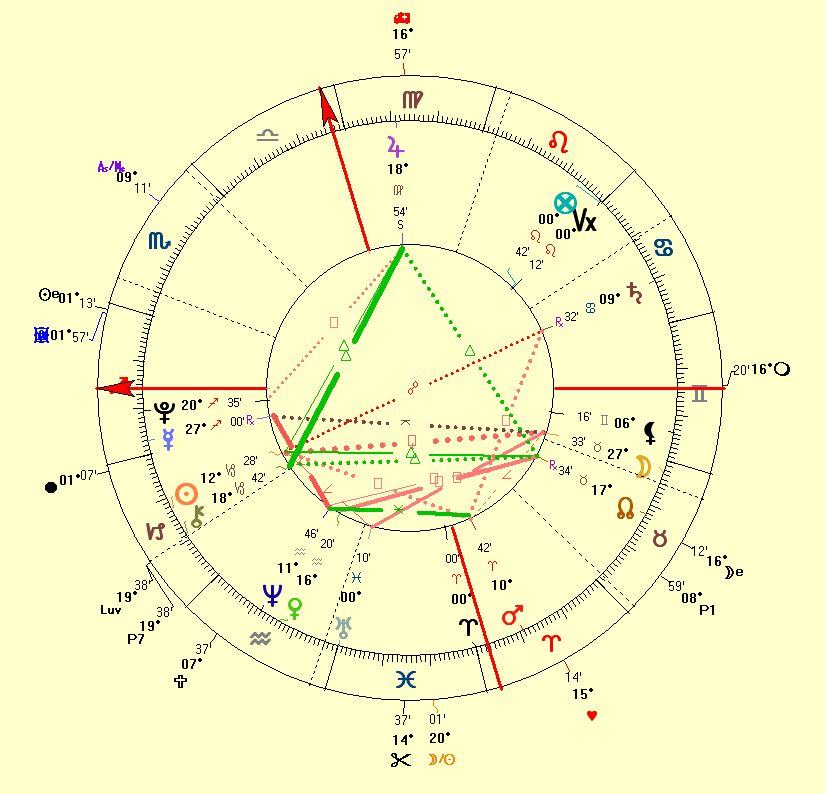 As usual, we will only look at what strikes us on that very moment.

In this Britney Spears wedding horoscope we find a Moon void-of-course at the 27th degree Taurus (conjunct the Fixed Star Algol, the head of the Gorgon Medusa -- the most evil Star in the heavens).

Any idea what this Moon void-of-course may signify? Just take a look on what we told on our dating page.

In a marriage chart the void of course Moon is not an issue BUT when the Moon is between 25-29° Taurus (the Weeping Sisters with Algol), this is hardly fortunate.

The Fixed Star Algol (very) often causes someone to lose his (her) head.

No doubt Britney Spears lost her head too on that very moment.

Some hours later, the Moon will have entered Gemini exactly squaring Uranus at 0° Pisces and in an exact opposition to her natal Uranus at 0° Sagittarius AND entering her natal 9th house, denoting sudden 'insight', upheaval and disrupting events.

In marriage horoscopes one should always avoid applying squares from the Moon to disruptive Uranus!

Mercury (ruler of the 7th house) and Neptune in an exact semi-square show confusion, unrealistic thinking and dreaming,....

Neptune in an adverse aspect almost always dissolves what it touches...

The 0 degrees denote a new beginning. 0 degree of Pisces is all about chaos, dreaming, illusions and pure phantasy.

Clearly, a nebulous moment for Britney Spears and her friend...

The Ascendant right in the center of Sagittarius as in this Britney Spears wedding horoscope mostly denotes juridicial matters and legal issues.

As we are not really sure of the exact Wedding time, we will not delineate this rising sign any further.

Conclusion: The mentioned planetary positions and configurations in this Britney Spears wedding horoscope clearly point to a sham marriage, a nebulous moment for Britney Spears and her friend resulting in the signing of the annulment papers some hours later...

Just take a look at the following graph, that we calculated with our Yearly Horoscopes: 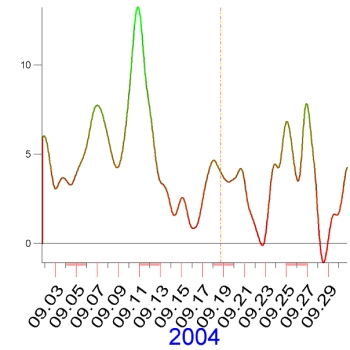 Following this model, September 18, 2004 is just so-so as a wedding day (not too bad, but not good either). 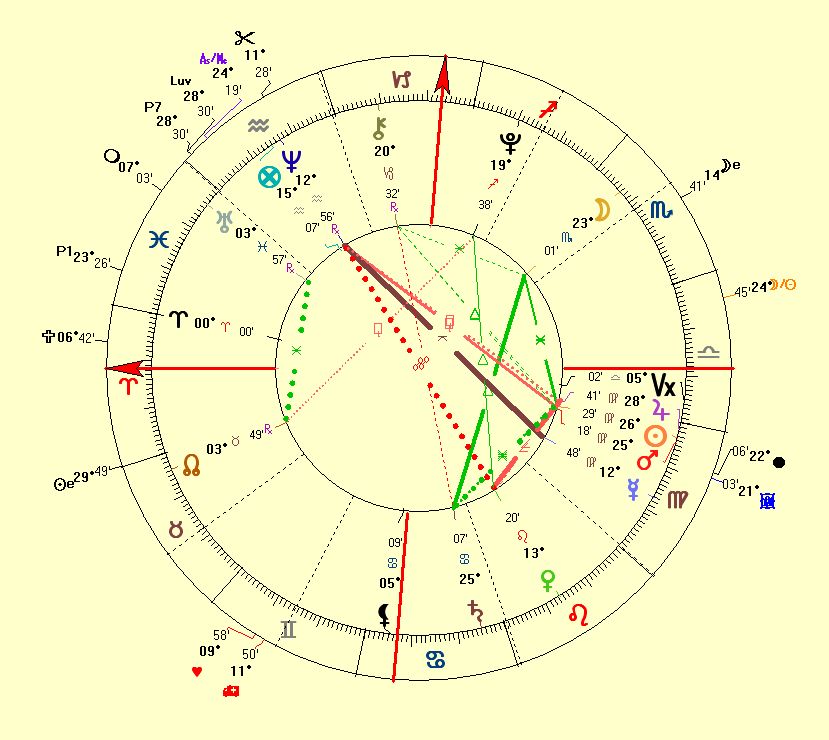 Note that, after the September 18th nuptials, Britney Spears and Kevin Federline have admitted that they're not legally wed.

Britney Spears and Kevin Federline told People magazine that they have yet to file their marriage license...

What does the chart reveal?

Let's take a look at the standouts for the 7:30 p.m. PDT time given by Star Magazine:

The Ascendant in Aries (if the time of this Britney Spears wedding horoscope is correct) denotes a speedy and quite impulsive marriage.

Aries is too impatient to wait and initiates, starts -- but seldom finishes what it started.

Aries is the self-starter.

The ruler of the Ascendant, Mars, is conjunct both the Sun (combust) and Jupiter.

As the ruler of the Ascendant in this Britney Spears wedding horoscope we wonder if Mars would not make the marriage "powerless"...

The Sun-Mars-Jupiter combo is one of the classical 'marriage aspects' (when this trio enters Libra - sign of relationships - we may expect a marriage-boom, but quite some legal issues too because Libra, the Scales, is the sign of justice!).

This Sun-Mars-Jupiter combo is the apex of a small triangle because this combo is sextile to both the Moon and Saturn.

A small triangle denotes sociability and is always a blessing because it promotes ease and is quite purposeful.

When the ruler of the 1st house (Mars), signifying the own Self of the relationship, the 5th house of love and children (the Sun) and the 9th house of publicity (Jupiter) conjoin one another, we get the picture of a 'love relationship made public'.

What else would a marriage be?

However, Jupiter - denoting the law - in Virgo - sign of administration - is in its detriment and combust.

No wonder the legal part (Jupiter) is missing...

Moreover, Jupiter is posited at 28° Virgo.

According to the German astrologer Michael Roscher this is a degree of escapism in dreams and with Jupiter here, this degree definitely gets a religious background too.

This seems to be very apt for this Britney Spears wedding horoscope.

Mercury is exactly inconjunct Neptune. Mercury is very strong in Virgo in this Britney Spears wedding horoscope and the more so because it is the final dispositor of the chart and ruler of the hour as well.

The marriage is all about Mercury, documents that is.

A Mercury-Neptune inconjunct is one of confusion, misunderstandings, miscommunications and news or messages that prove to be false, uncertain or unclear.

It's everything but what's real.

It's pointing to a very unreal situation or deceit in this Britney Spears wedding horoscope.

Something, some news is not made public.

In marriage horoscopes there is the possibility that one of the partners is hiding something the other doesn't know.

Most often an inconjunct from Neptune points to something that is missing, that is absent and the very exact aspect with dominant Mercury may point to a missing document.

The Node-Uranus sextile points to sudden exciting connections and unions.

Mars sextile Saturn is about determination and formalizing a plan.

What also struck us in this Britney Spears wedding horoscope was the Venus-Neptune opposition .

Over and over our practice has shown that (inconjuncts and) oppositions from Neptune denote something that dissolves, is missing, disappears,...

Oppositions point to what is outside, what is 'out there' and what is out of reach.

It may also indicate compromise or conflict.

In a positive way an opposition brings admiration, even devotion. In the worst case, it denotes absence and deceit.

What does it mean when Neptune opposes Venus - planet of relating - in Leo - the sign of playful love and children -?

Will it dissolve love, or does it point to devotion? What about the issue around children?

In our opinion we think Kevin's children did not attend the wedding because the Venus-Neptune opposition is in the 5th-11th house axis of children in this Britney Spears wedding horoscope; pointing to their absence.

There is another item in this Britney Spears wedding horoscope that we would like to discuss here too: the Moon in Scorpio in the 8th house of shared resources.

The Moon is in its fall in Scorpio and makes a trine to Saturn, which is in its detriment in Cancer.

The Moon is Saturn's dispositor making this trine VERY important.

Moreover there are different Moon-Saturn connections in this 'spiritual marriage horoscope' of Britney Spears.

Let's sum them up:

There is fear to be emotionally tied together, fear for restriction too.

The accompanying strong Uranus/Neptune connections point to living in a dream or in trance.

Normally such connections can be found in horoscopes around situations that make one 'high', stoned -- not sober.

We are puzzled about why this connection is so dominant in this Britney Spears wedding horoscope.

It's also strange that we cannot find any relationship or connection between the ruler of the first house (Ascendant) and the 7th house in this Britney Spears wedding horoscope.

Anyway, the weak position of the Moon points to legal issues around shared resources (Pluto, ruler of the 8th house in the 9th house of publicity and legal affairs).

Legal issues are confirmed by the exact Venus-Jupiter semisquare. Saturn in its detriment may point to missing structures or formalities and the weak position of the Moon may point to emotional issues.

The Moon is applying to sextile Saturn, and will apply to sextile Jupiter before it leaves the sign Virgo.

This denotes legal disputes in the end (ruler of the 4th house in its fall and its dispositor, Pluto, is square Jupiter in its detriment).

In our opinion the ruler of the 10th house in the 4th house in its detriment, trine its own dispositor in fall, is not a very good omen in marriage horoscopes.

Even the trine cannot be considered harmonious, because a trine always denotes "no friction, no resistance".

The end-of-the-matter is proceeding without resistance.

The 4th house represents the end-of-the-matter (end-of-the-marriage) and when there is some affliction we consider the marriage of Britney Spears might not endure.

Let's take a closer look at this official October 7th marriage horoscope of Britney Spears (Sun on the Ascendant chart): 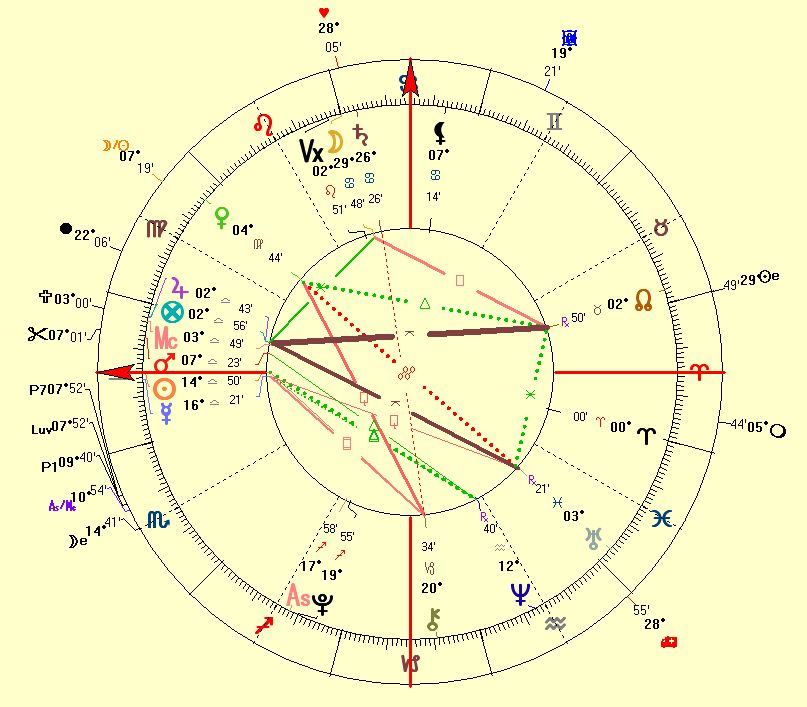 Let's discuss the standouts of this official Britney Spears wedding horoscope for a moment:

The Sun at 14-15° Libra, a critical degree, points to a frivolous and playful attitude.

According to Sepharial this degree may denote problems in marriage.

However, in our opinion the Sun in this degree denotes very physical desires and a very lustful relationship.

We hope Britney Spears and Kevin Federline are not taking lust for love.

Jupiter in the degree of the Node may bring about legal issues (Jupiter rules law and publicity).

In this Britney Spears wedding horoscope, Jupiter is the apex planet of a YOD configuration created by Jupiter inconjunct with Uranus and the Node.

This YOD marks an exciting turning point and a happy event for Britney Spears and Kevin Federline.

The position of the Moon is puzzling us.

The Moon may be void of course as well. This all matters!

If -- yes it's a BIG IF -- the Moon is in the early degrees of Leo, there is a Trapezium configuration (often called a "bath-tub") between Uranus, the Node, the Moon and Jupiter.

This configuration is formed by 2 YODs (however, more precisely, there is one YOD and a Boomerang; a Boomerang is a YOD with a planet opposing the apex planet).

A "Bath-tub" configuration signifies an eternal search for balance and a clinging to one another.

There are chaotic experiences and this configuration tries to bring order to the chaos by tenaciously sticking to a status quo.

There is fear to lose something.

A Boomerang is a configuration of ambition and adjustments to other people.

It may bring tension.

This configuration is often called the configuration of "shipwreck" and let's hope this is not what can be expected of the embarkment on matrimony of Britney Spears!

Please note that if the Moon is not in the early degrees of Leo, there is no Boomerang.

Still on condition that the Moon is in the early degrees of Leo in this official Britney Spears wedding horoscope, the Boomerang is created by apex Uranus opposing Venus while Venus semi-sextiles Jupiter and (possibly?) the Moon.

This is a configuration of a happy and cheerful woman in love.

This configuration may point to pregnancy too because the combination of the Moon, Venus, Jupiter and Uranus most of all bring about pregnancy and/or childbirth.

However, note that Venus is in the sign of its fall seeking too much perfection, which it can't find.

Mercury in the air sign Libra is talkative and mentally focused on balance and relating.

In fact the outcome of this official Britney Spears wedding horoscope very much depends on the position of the Moon and the exact time of the official marriage of Britney Spears.

Perhaps the way this relationship will evolve in the future might learn us more about the Moon's position.