The (Love) Life of Billy Joel 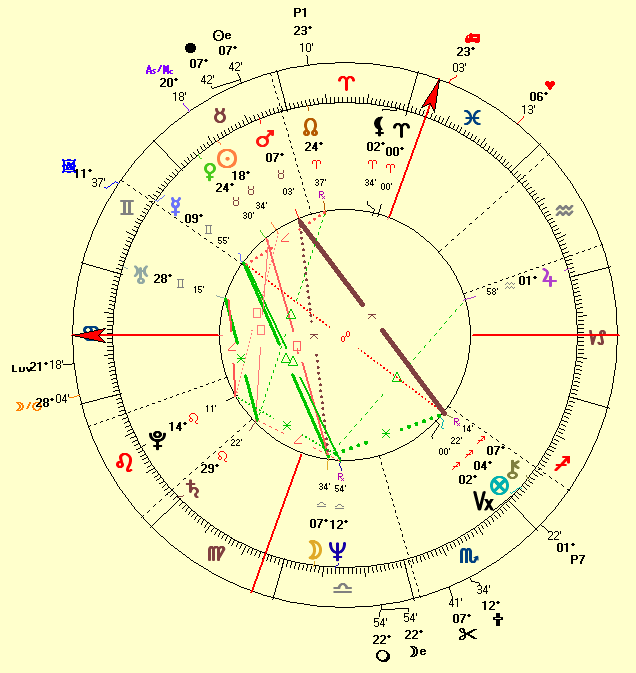 Standouts in the natal chart of Billy Joel

Not to overwhelm you with information, we will only assess the horoscope of Billy Joel by looking at the factors that only have some meaning for his love life.

In the horoscope of Billy Joel we can find the following items:

The Ascendant at 15° Cancer, a critical degree often denoting loneliness and emotional issues.

However, the 29th degree in a sign brings endings too.

Because Saturn is the ruler of the 7th house of partners and relationships, it is no wonder that The Piano Man divorced different times.

The partile Moon-Mars inconjunct at 7° in a sign can be quite difficult to handle.

The Moon is the ruler of the 1st house (Ascendant) and this partile aspect with Mars makes Mars a most powerful planet in the natal chart of Billy Joel.

Because Mars is posited in Taurus, the sign of its detriment, Mars becomes a 'malefic' (some people don't like this word, but just know that this position of Mars can be really upsetting!).

Moreover, the Moon is applying to a conjunction with Neptune, and this aspect too can be quite difficult to handle at times.

The Moon-Mars-Neptune combo denotes extremely disappointing events and can be emotionally very upsetting.

This configuration may denote a feeling of drifting without any direction. Often there is hopelessness.

A planet in the degree of the Node signifies a fatal event and/or a crisis of some sort.

Venus in the degree of the Node, Venus being the planet of love, denotes some fateful events in Billy Joel's love life.

The marriage of Billy Joel

To cast the marriage chart, we calculated the exact moment of sunset, which is 6:28 pm Local Time.

Before analyzing this marriage chart we were curious what our own researched Marriage Graphs would tell...

Let's take a look at his 2004 Annual Marriage Graph to see what his best days to marry are: 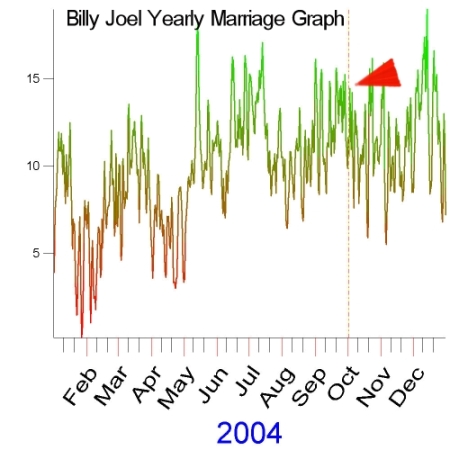 If this model is correct, October 2, 2004 seems to be a fortunate day for Billy Joel to marry!

Let's zoom in on the Monthly Marriage Graph for October 2004: 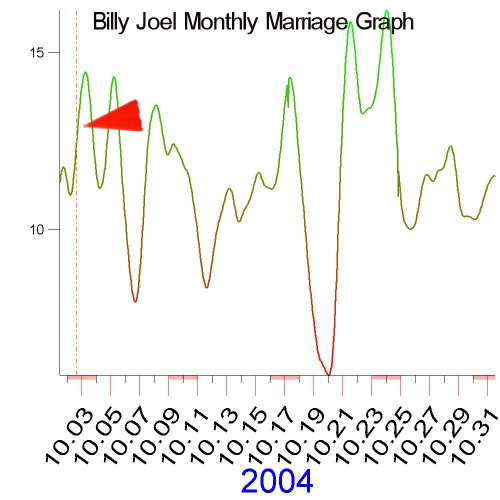 According to our Monthly Marriage Graph, this day is a fortunate one indeed.

Now, let's take a closer look at this marriage horoscope for a moment. 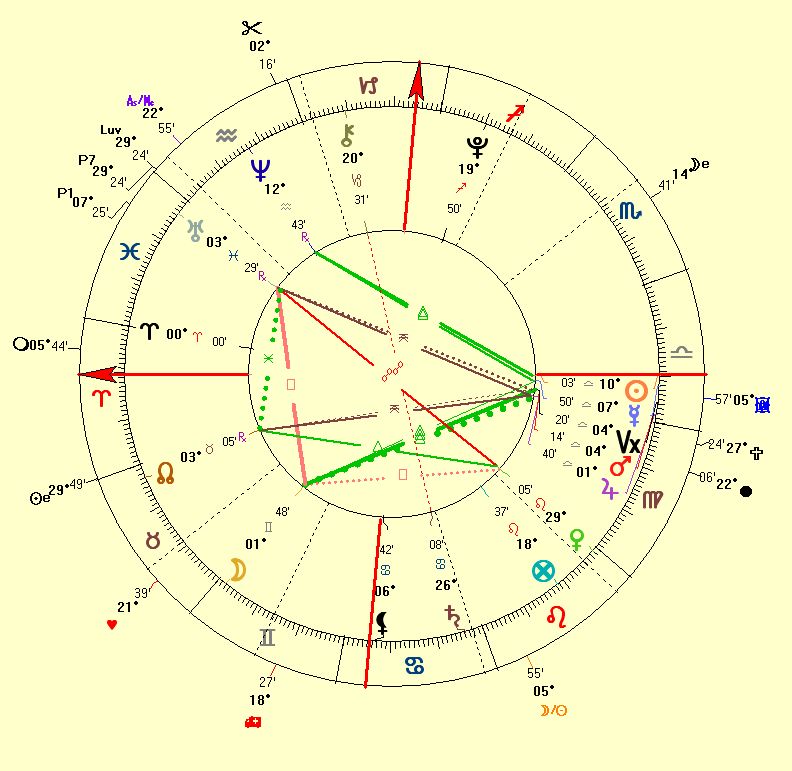 And again, lets only assess the standouts:

In this marriage horoscope of Billy Joel Mars and Uranus are in an upper or waning inconjunct and Uranus is in the (numerical) degree of the Node denoting some sudden and unexpected accidents, disruptions and violence.

In short, this aspect is about upsetting events, the more so because disruptive Uranus is in the degree of the Node.

Our research is not conclusive yet, but we have found a Mars-Uranus combination in some marriage horoscopes that were marked by physical injuries through accidents or illness (surgery).

Anyway, it's an aspect you better avoid in a marriage horoscope as it often brings a break-up.

In this marriage horoscope of Billy Joel, we can find a YOD-configuration or a double-inconjunct.

Mars is the apex planet and is conjunct Mercury, the Sun and Jupiter.

The upper inconjunct denotes a new situation, a profound change.

Apex Mars in Libra is in its detriment and upsets the balance of Libra pointing to sexual issues here.

No doubt that a partile Moon-Jupiter trine in air signs points to a happy and successful event.

This is one of the best aspects you can have in a marriage horoscope.

It's a blessing bringing optimism and protection.

The Sun and Venus are in mutual reception because the Sun is in Venus' sign Libra and Venus is in the Sun's sign Leo, the Royal Sign.

There is exchange between love (Venus) and the heart (the Sun).

This configuration is a blessing in any marriage horoscope.

As you may recall the 29 degrees denote endings (the end of a situation) and bring desire to the foreground.

Venus, planet of relating and love at 29° Leo signifies a desire for love and relating.

Venus is in a position of Royal Love.

However, Venus will soon enter Virgo, bringing a more serious and down-to-earth undertone in the marriage.

Virgo is the sign of servitude and day-to-day activities.

Also note that Venus is moving towards an opposition with retrograde Uranus...

It's unlikely this marriage will last!

Aside from these standouts, also note the position of the Sun in conjunction with the Fixed Star 'Vindemiatrix', the Star of Widowhood.

We rectified the horoscope of Billy Joel using Astrodamus 1.0™.

The annual analysis for 2004, the year of his marriage, shows the following blocks:

The annual analysis for 1985 (the year of the first marriage of Billy Joel) gives the following indications:

How will Billy Joel fare according to the Astrodamus predictions?

Update June 18, 2009: According to a press statement published June 18, 2009, Billy Joel and his wife Katie Lee Joel have separated after nearly 5 years of marriage.

A statement released by their reps read: "this decision is a result of much thoughtful consideration. Billy and Katie remain caring friends."

Update April 15, 2015: Billy Joel and his girlfriend, Alexis Roderick, have confirmed they are expecting a baby girl this summer 2015

He has been married three times — to Brinkley, Elizabeth Weber Small and Katie Lee.

This is the 4th marriage for 'the Piano Man.'

Update August 16, 2015: Billy Joel's wife Alexis Roderick gave birth to a daughter Della Rose at 2:40 am on Wednesday August 12, 2015 in New York, weighing in at seven pounds and six-and-a-half ounces.

This is Joel’s first child with Roderick.