The (Love) Life of Justin Bieber 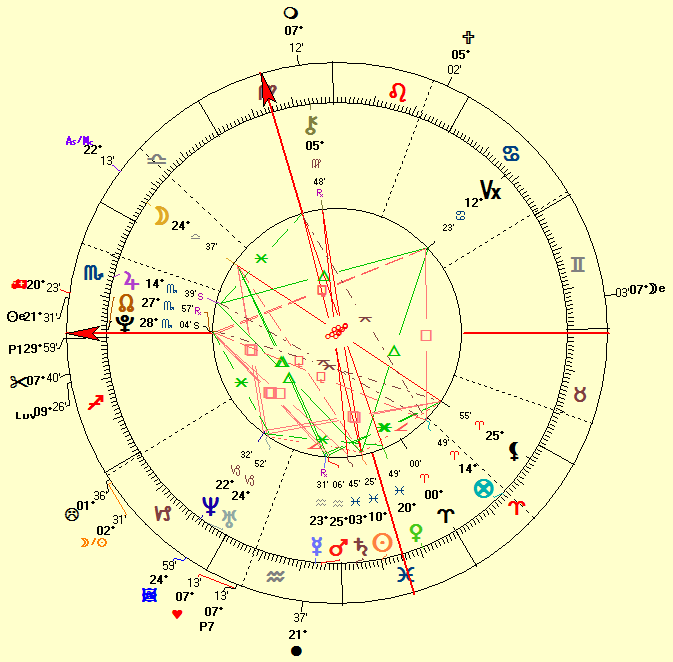 Standouts in the horoscope of Justin Bieber

Not to overwhelm you with information, we will only assess the horoscope of Justin Bieber by looking at the factors that only have some meaning for his love life.

Most planets in the Eastern Hemisphere indicate a self-sufficient and self-reliant personality who is independent and likes to be active.

Exaggeration is part of his life, as well as religious ideals and seeing things too big.

He can be very devoted and serve others faithfully -- for good or ill.

Jupiter is at a very artistic and creative degree, almost always resulting in success.

The Pisces stellium adds to his obedient nature but also to his artistic and creative assets.

Pisces is reclusive and servile but also secretive.

It's the sign of institutions, working behind the scenes and withdrawal.

The stellium in this zodiac sign reinforces his sensitive and extremely imaginative nature.

Justin Bieber tends to be more "fluid", but in a controlled and quite forceful way (most planets are in fixed water signs, reflecting Scorpio).

In Justin Bieber's natal chart, we find the following powerful and predominant connections:

The interception of the mutable signs Sagittarius and Gemini in the 1st-7th house axis of relationships denote that relationships lack consistency and commitment.

Learning and education are extremely important but because of the interceptions, formal educational goals are not achieved easily.

Interestingly, Justin Bieber was "away schooled" since he was always traveling -- which clarifies the interceptions of these mutable signs perfectly.

When Mars squares the Ascendant-Descendant axis of relationships, chances are his impulsive and rather inflammable behavior may create havoc.

In this position (Mars is in disruptive Aquarius in the 3rd mental and verbal house), disagreements and mental short-circuits may bring about accidents and some aggression.

The angular Pluto and Lunar North Node indicate that Justin Bieber has a lot of stamina and he is able to make a powerful impression.

He may have tons of energy and he may tend to bowl people right over.

The rising North Node of the Moon clearly points to him as "an overnight sensation."

He's able to promote himself with self-confidence and intensity.

The conjunction of the North Node with Pluto enhances Pluto's power, increasing determination and forceful willpower.

Because Pluto is the planet of transformations and reversals, some self-destructive traits may be noticeable though.