The (Love) Life of Gisele Bündchen 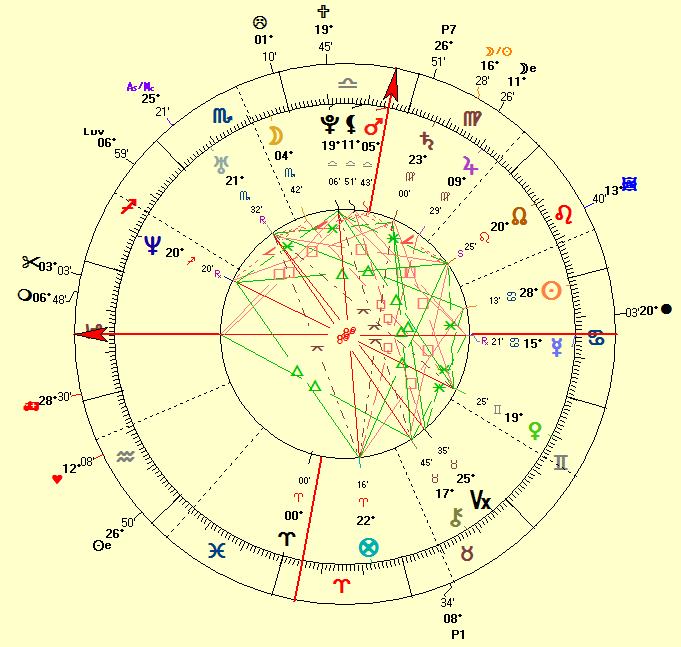 Standouts in the horoscope of Gisele Bündchen

Not to overwhelm you with information, we will only assess the horoscope of Gisele Bündchen by looking at the factors that only have some meaning for her love life.

When most planets are situated in the southern hemisphere it is indicative of having a public life, getting 'out', becoming noticed (often in a very visible way).

The Ascendant and Mercury at a so-called "critical degree" indicate ambition, and a huge fear to be separated (and/or rejected) from loved ones.

It's often very difficult for the native to let go emotional ties and, very often, sadness and feeling down have to do with relationships that cause sorrow and/or disappointments.

To avoid this, they have to get out and socialize, and set new career goals.

Setting Mercury, right at the Descendant (7th house cusp), is indicative of lots of (often superficial) relationships and encounters that serve the purpose of helping her to build an opinion and/or take decisions.

Following our own research, that is still ongoing, people with Mercury exactly conjunct the Descendant decide very quickly to marry after a "successful date."

In her natal chart, we find the following predominant connections:

The unaspected Moon and Jupiter suggest the following:

The T-square between Venus, Saturn (the apex planet) and Neptune suggests, among others, love's sorrow, to separate because of the wrong love ideals and because of disappointment, the unfulfilled love longings, the cooling off of a love bond.

The other T-square between Pluto (the apex planet), the Ascendant and Mercury is indicative of, among others, tense disagreements, to push through, to try to persuade someone or others.

The love life of Gisele Bündchen

Gisele Bündchen reportedly dated João Paulo Diniz, one of the heirs to Abilio Diniz, owner of Brazil's biggest supermarket chain and 17 years older than her, for a couple of months in 1999.

In the same year 1999 she dated and broke up with João Paulo, she then shortly dated fellow model Scott Barnhill.

Between 2000 to 2005 she was also the girlfriend of Leonardo diCaprio.

She reportedly told life with him was hectic and with bad habits, the actor drank, smoked and worked excessively, which is why she left him.

In 2005, Gisele began dating professional surfer Kelly Slater after her split from Leonardo.

The two were together for a brief time until early 2006.

In 2006 she had a short-lived affair with actor Josh Hartnett.

She had become romantically involved with Tom Brady while Tom's ex-girlfriend Bridget Monahan announced in mid-February 2007 that she was pregnant with his baby.

They married quietly, away from the press on February 26, 2009 "just before 6 p.m. at the St. Monica Catholic Church in Santa Monica, California" according to Usmagazine.com.

The short period of time between her engagement and marriage may be related to Mercury conjunct the Descendant in her natal horoscope.

The couple had a second wedding for family and friends on 4 April 2009 in Costa Rica.

Their son Benjamin Rein was born on 8 December 2009.

On December 5, 2012 she gave birth to their daughter Vivian Lake Brady.

Tom Brady revealed that he had to work at his marriage every day after Gisele told him that she wasn't "satisfied."

The couple who had been suffering through marital issues finally concluded their divorce on October 28, 2022.

This came not as a surprise if you consider the comparison of their natal 30° tables and the 2020-2022 transits of some outer planets, as discussed here.

Click here to read the intimate astrocard report for Gisele Bündchen and Tom Brady (born August 3, 1977 at 11:48 am in San Mateo, California/USA).

What has Astrodamus to tell us about her (future) (love) life?