The (Love) Life of Miley Cyrus 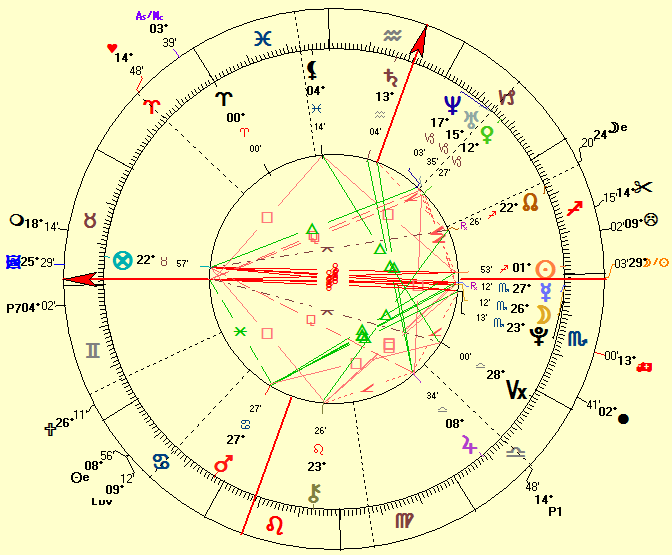 Standouts in the horoscope of Miley Cyrus

Not to overwhelm you with information, we will only assess the horoscope of Miley Cyrus by looking at the factors that only have some meaning for her love life.

An emphasis on the Western hemisphere implies that her life is especially influenced, steered, by other people, by her partner(s), the external environment at large.

She needs others to shape her life and help her in her own development.

The downside of this predominant Western hemisphere is becoming attached and even dependent upon (the opinion of) others, being at the mercy of an audience, a public, the other(s) or partner.

Unexpected tragedies, disruptions or upsetting events may happen in far-away places that force some kind of separation of people and/or property.

15° Capricorn is a degree reflecting "the cry for love", a topic that may preoccupy her.

Upsetting and controversial Uranus at this degree, which is also at the cusp of the public 9th house, clearly emphasizes her role (and perhaps mission) to show the world at large that the energies of love are not limited to gender, age, race or whatever...

In that way, she has a public message because of the involvement of the 9th house of publicity and the breaking up (Uranus) of limitations and boundaries (Capricorn).

Scorpio often lives in some extremes and because the stellium is also posited around her 7th house cusp of relationships, partnerships and other people (her audience), she lives this intensity especially in her relationships (at large), with her audience.

This is confirmed by the tight MO=PL/AS midpoint that we delineate in a second.

Because Scorpio is the sign of reversals, her relationships always transform profoundly from one level to another and at times in an extreme way.

The tight Moon-Mercury conjunction in Scorpio is close to her Descendant and suggests the need and urge to talk to or vent her emotions to an audience, a public, others (her partner or husband inclusive).

However, don't be mistaken, people with the Moon in Scorpio are EXTREMELY secretive about their private life.

Combined with the Sun in the 7th house of relationships, she wants to show herself physically to others (the Sun represents the own physical body).

It also represents creative self-expression (the Sun) in a public way, before an audience (the 7th house).

Needless to say, this stellium and the position of the Sun clearly point to her as a performer, in front of an audience, a public (physically and by means of her voice)!

The stellium in Capricorn, points to the importance of setting boundaries and loving some formalities and traditions too (after all, Saturn is the highest planet in her chart too).

Esteem, reputation, status and accomplishments are very important to her.

The Venus-Uranus conjunction in Capricorn suggests a free spirit in matters of love.

From our own experience we have learned that people with a tight natal Venus-Saturn semi-sextile are very loyal to their partner(s) and may experience lasting love bonds.

Venus, planet of relationships, conjunct the 9th house of foreign countries very often denotes a lover "from abroad" or faraway places so that it does not come as a surprise she married an Australian...

When the houses 9 and 10 are related, the career almost always is linked to foreign countries, publicity, spreading wide and far.

She may deal with foreign managers, be more known in other countries than her own.

Publicity affects the career (for good or ill).

Because the 9th house is also the 12th house of the 10th house, she may face some career down-time or career-related deceptions now and then.

The Ascendant at 28° Taurus denotes wealth.

Numerous people with this Ascendant accumulate money, possessions, in whatever way, especially when confirmed by other astrological patterns or configurations.

In Miley Cyrus' natal chart this is confirmed by the Jupiter-Saturn trine, the Venus-Jupiter square, Jupiter and the MC in trine at the same numerical degree and the angular Sun as well.

The love life of Miley Cyrus

The first person she ever hooked up with was a girl (or two), she confessed in an interview.

In November 2009, Miley Cyrus calls Liam her best friend without confirming or denying that they were dating because she wants everything to be very private.

On March 7-8, 2010 she confirmed Liam was her "boyfriend" and they had a relationship.

The album "Can't Be Tamed," which was released in June 2010, was a whole lot inspired by Liam Hemsworth.

In August 2010 they split because, reportedly, Liam Hemsworth cheated and because of Cyrus' hectic work schedule but in September 2010 they were back on.

Reportedly, they had split again in November 2010 but were together again in March 2011 although "taking it slow."

From December 2011 on, they were seen attending events both together again.

Miley Cyrus confirmed in June 2012 in a statement to People magazine that she and Hemsworth were engaged but rumors went they split again in early 2013.

Miley Cyrus unfollowed Hemsworth on Twitter in September 2013 and her rep confirmed that they had broken off their engagement.

Reportedly, she and Patrick Schwarzenegger broke up in April 2015.

In October 2015 Liam told a men's journal that his relationship with Miley Cyrus was not a fling and actually was an important part of his life, and always will be.

During the 2015 Christmas-New Year period Miley and Liam met again.

In January 2016 she reportedly spent time with Hemsworth's family in Australia and was seen with Elsa Pataky, the wife of Hemsworth's brother Chris Hemsworth.

The time spent in Australia and with Liam Hemsworth's family reportedly helped their relationship.

In January 2016 the couple planned to move back in together and get married, which resulted in rekindling their relationship in March 2016.

In May 2016 Liam confirmed to another men's magazine, he and Miley Cyrus were back together again.

In July 2016, Miley Cyrus got a tattoo on her left upper arm of a jar of Vegemite that fans think was in honor of Liam Hemsworth.

Miley and Liam were engaged again in October 2016.

In May 2017 Miley Cyrus talked about her new album and single, inspired by Hemsworth.

In November 2017, the pair appeared to wear wedding rings on the 4th finger.

On November 13, 2018 their Malibu (California) house burned down in the Woolsey Fire.

Miley Cyrus and Liam Hemsworth tied the knot on December 23, 2018 during an intimate low-key wedding at her Franklin home in Tennessee.

Miley Cyrus went through another breakup with boyfriend Cody Simpson in 2020.

Update August 11, 2019: reportedly, "Liam and Miley have agreed to separate at this time."

Rumors of a split between both began on Saturday August 10, 2019, after the “Mother’s Daughter” singer posted a photo of herself on Instagram in which she was not wearing her wedding ring.