The (Love) Life of Jennifer Lopez

The horoscope wheel below shows the Sun on the Ascendant with fixed houses. 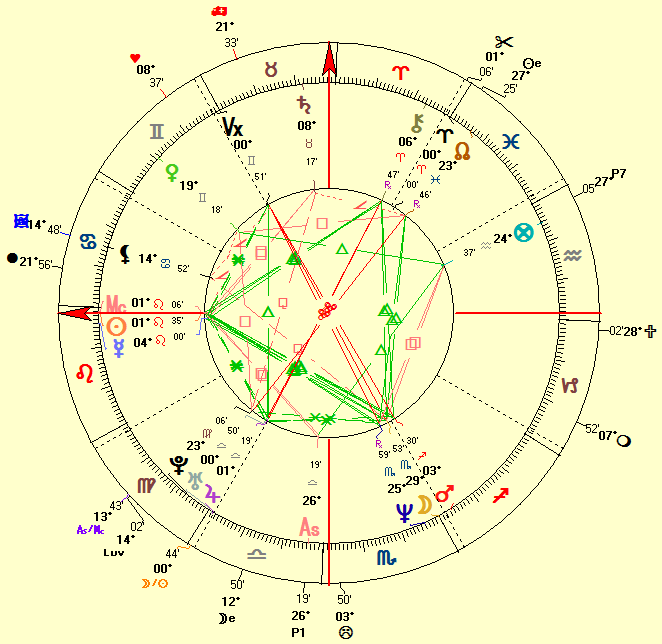 Standouts in the horoscope of Jennifer Lopez

As usual we will look at the standouts in the natal chart of Jennifer Lopez.

As we do not have an exact time of birth, we will only assess the horoscope of Jennifer Lopez by looking at some general factors that only have some meaning for her love life.

In the horoscope of J. Lo we can find the following items:

Disruptive Uranus on 0° Libra, the most social degree of the Zodiac, easily falls out with friends.

Uranus is too freedom-loving to stick to a single relationship and is not suited to matrimony.

There is quite a good sense of rhythm and dancing may be a favorite occupation for Jennifer Lopez.

In this position Uranus can bring sudden encounters too.

We discussed the Moon void-of-course when we analyzed the natal chart of Julia Roberts.

Indeed, Julia Roberts too has a void-of-course Moon in her natal chart.

We told that people born under such a void are 'wanderers', who go with the flow of time and tend to 'suddenly' fall in love (and even 'fall in marriage').

They are constantly on the move (want to move), but without a specific direction.

They do not belong to somebody, nor do they rest for a long time in one place.

Research has shown that people born under such a Moon were denied from a normal family-life.

Pluto and the Moon's Node are in the same degree. Matters of the nature of Pluto can become critical.

There may be a crisis.

Considering the Node and Pluto act together in the same degree, we get a very powerful combination of big transformations, dramatic changes and important contacts.

Pluto is about power, extreme force and transformations.

The Node at 23° Pisces, position of the fixed star Markab, brings sorrow and sadness (possibly because of tragic separations, deaths -- Pluto) in the life of Jennifer Lopez.

A tight Sun-Jupiter sextile is always a blessing in a natal chart.

Both fiery planets bring energy and a very outgoing way of expressing the self, especially when one or both of the planets is placed in a fiery sign (Sun in Leo).

Considering fiery Mars too is placed in the 5th Solar house trine the Sun (Sun on the Ascendant) in fiery Sagittarius, there is quite some impulsive (playful and sexual) behavior (5th house), the more so because the Moon is going to conjoin Mars.

This Sun-Jupiter-Mars combo is a very sexual configuration denoting bodily (Sun) drives (Mars) out in the open (Jupiter).

Put in another way, this combo shows exhibitionism.

The love life of Jennifer Lopez

She met actor Ben Affleck on the set of the movie Gigli and began a relationship in January 2002 while Lopez was still married to Cris Judd.

The couple got engaged in November 2002 but called off their wedding, planned for September 2003, reportedly because of “excessive media attention.”

The most private marriage ceremony kicked off around 6 p.m. and clocked in at under 30 minutes.

Rumours go that J. Lo got married because she is pregnant.

Other sources point to a possible illegal marriage because Marc Anthony, who was recently granted a quickie divorce in the Dominican Republic from his wife of four years, Dayanara Torres, a former Miss Universe, may have technically still been married to his ex-wife when he exchanged vows with Jennifer Lopez.

There are different ways to get an answer to this question.

We can cast a horary chart or we can delineate her natal chart and delineate the progressions and transits, to name but a few methods.

We at Cosmic Technologies (CosmiTec) prefer to delineate the natal chart of Jennifer Lopez for now, including the transits and progressions, trying to find out what happened June 5, 2004.

We always use the midpoint structures (midpoint trees), following the principles of Uranian Astrology and so include the TNP's (Transneptunian Planets as listed by the Hamburg School).

All delinations can be found in "Rules for planetary-pictures: The astrology of tomorrow" by Witte-Lefeldt and "The Combination of Stellar Influences" (CoSi) by Reinhold Ebertin.

So let's take a look first at the transits and progressions of Jennifer Lopez set up for this date.

The transits for June 5, 2004 show the following planetary pictures:


Also note that transiting Venus returned to its natal position at 19° Gemini.

The progressions (1 day for a year) for June 5, 2004 show the following factors in the horoscope of Jennifer Lopez:

Conclusion: we at Cosmic Technologies are of opinion that J. Lo did marry on June 5, 2004 indeed.

The marriage horoscope of Jennifer Lopez to Marc Anthony

This said, let's discuss this so-called marriage horoscope for a moment (as the exact hour of "marriage" is still unclear -- we only know the marriage was contracted in the afternoon, after 6 p.m., we cast the chart with the Sun on the Ascendant). 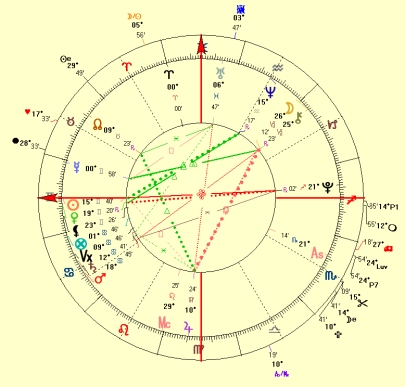 And again, we will only look at the standouts.

In this marriage horoscope of Jennifer Lopez we find the Sun and Neptune at a critical degree in an exact (= plactile) trine.

The Sun-Neptune trine is a beautiful aspect showing devotion.

Neptune at 15° Aquarius denotes escapism, while the Sun at 15° Gemini has to do with law and juridicial issues.

So, we think this marriage seems to be kind of an escape.

The Moon is void-of-course at 26° Capricorn.

We refer to our dating page for a delineation of this void.

We also point to our other celebrity and marriage horoscopes (e.g. Britney Spears) in which we also found a void-of-course Moon.

A void-of-course Moon may indicate that the outcome will be totally different from what will be expected...

In a marriage horoscope this is not a good omen!

Mercury at 0° Gemini brings about a lot of change. According to Michael Roscher, this degree denotes quite some change of the place.

This degree is one of the most unstable ones.

A retrograde Venus in a marriage chart is said to be unfortunate.

Venus retrograde often re-considers relationships. This is not good if you are married...

One better re-thinks, re-considers before marriage!

Retrograde planets are turning backward in the signs, re-thinking the matter.

You got the picture?

Update February 25, 2005: February 24, 2005 Jennifer Lopez publicly admitted for the first time that she and Marc Anthony got married in June 2004 at her Beverly Hills home.

So, our prediction that we posted June 2004, was right.

Update November 9, 2007: Jennifer Lopez has now officially confirmed the rumours, telling an audience of over 10,000 at Florida's American Airlines Arena on Wednesday night November 7, 2007: "Marc and I are expecting."

Update July 16, 2011: Jennifer Lopez and her husband Marc Anthony in a joint statement to People magazine July 15, 2011, state "We have decided to end our marriage," "This was a very difficult decision. We have come to amicable conclusions on all matters."

After 7 years of marriage, this will be the 3rd divorce for Jennifer Lopez.

The announcement does NOT come as a surprise if you analyze the wedding chart.

However, the Moon VOC is not that important in wedding charts (it is for a first date or a blind date though).

There are too much other factors that play a major role.

It's likely Jennifer Lopez is heading for another marriage (it would be her 4th) and it might become Alex's 2nd marriage.

Update December 22, 2020: Jennifer Lopez admitted on December 21 she might not get married to fiancé Alex Rodriguez after all.

They were supposed to tie the knot in Italy, but cancelled the ceremony due to the 2020 corona virus crisis situation.

“It was just a little disappointing,” Lopez said about cancelling the wedding.

They are both reflecting on what it means for them to be married, after all.

Update March 13, 2021: After rumors spread the couple broke up, the couple announced they remain in a relationship and are "working through some things."

Rodriguez and Lopez have been in a relationship since 2017 and are still engaged.

Update April 16, 2021: Jennifer Lopez and Alex Rodriguez say they are better off as friends.

They both announced on April 15, 2021 that they are officially ending their two-year engagement.

Update April, 2021: Jennifer Lopez and Ben Affleck reportedly reunited after being spotted hanging out together in Los Angeles.

Ben Affleck proposed to her again while she was soaking in a bubble bath.

Update July 17, 2022: Jennifer Lopez confirmed her marriage to Ben Affleck at the Little White Wedding Chapel in Las Vegas during a tunnel of love drive-through ceremony "at twelve thirty in the morning" (12:30 am or, in the 24h notation this would be 00:30).

Jennifer Lopez wrote that the couple flew to Las Vegas on Saturday (July 16 that is), stood in line for their licence with four other couples and were wed just after midnight at the Little White Chapel, a chapel boasting a drive-through “tunnel of love”.

The marriage license from Clark County, NV filed Saturday, July 16 is valid for a year but it looks like the couple did not wait that long to marry...

Because she mentions the ceremony took place at twelve thirty in the morning, that would be the morning of July 17, 2022 actually.

Reportedly, each brought along one of their kids to the ceremony (her daughter Emme was reportedly on hand for the Vegas wedding).

Indeed, Jennifer Lopez will soon be called Jennifer Affleck for legal purposes after filing documents to legally change her last name to match her husband, Ben Affleck, following her marriage.

This is her 4th marriage and Ben's 2nd.