The (Love) Life of Emma Watson 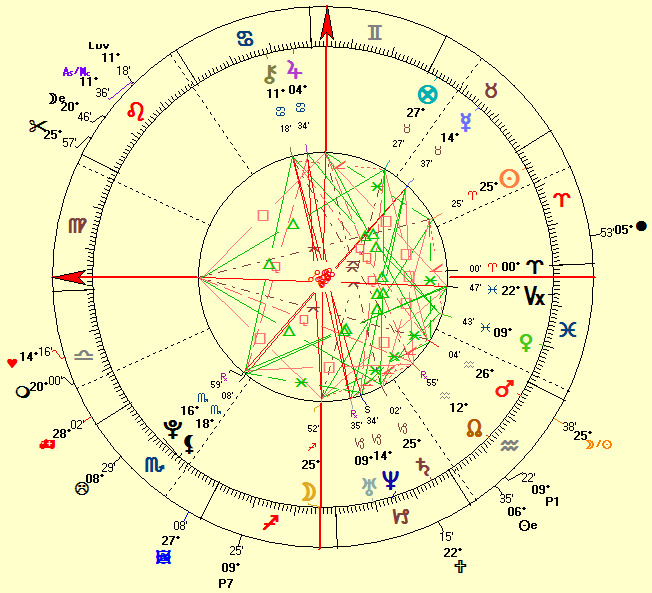 Standouts in the horoscope of Emma Watson

Not to overwhelm you with information, we will only assess the horoscope of Emma Watson by looking at the factors that have some meaning for her love life.

An emphasis on the Western hemisphere implies that her life is especially influenced, steered, by other people, by her partner(s), the external environment at large.

She needs others to shape her life and help her in her own development.

The downside of this predominant Western hemisphere is becoming attached and even dependent upon (the opinion of) others, being at the mercy of an audience, a public, the other(s) or partner.

Neptune stationary retrograde at a "critical degree" (14° Capricorn) suggests a pragmatic and rather realistic nature with some headstrong characteristics.

Mercury at 14° Taurus, another so-called "critical degree", denotes black-and-white thinking based upon principles.

This is to say she's stubborn.

There is a huge urge to be independent and letting go attachments (which is not always easy because Taurus is the most inert and fixed signs of all).

We, at Cosmic Technologies, have often noticed that this degree area on the Ascendant or occupied by the ruler of the Ascendant points to a rather short stature.

The intercepted stellium in Capricorn in the 4th house points to business-minded traits.

The family life can inhibit her free expression and require responsible roles early-on in life.

Some melancholic mood swings may result.

Intercepted signs in the 4th-10th house axis are most often found in natal charts of people who love to manage, supervise, have control over or direct something.

Emma Watson is popular and sociable.

When the houses 4 and 10 are related, the career almost always is influenced by family matters.

Also, there is more balance necessary between the public career and the private family environment.

Status, a career and public appeal create emotional security and whenever she feels bad emotionally, she may become yet more ambitious.

The Ascendant is the apex point of a YOD pattern which involves the Sun and Mars.

This pattern suggests that Emma gives a robust and confident impression.

She's driven and is able to take action.

The Lunar North Node being the apex point of a T-square that contains Mercury and Pluto suggests that she is able to persuade and has very nice communication skills.

This is the configuration of the spokeswoman, someone who has to say something, who propagates and who is able to influence others by speech or text.

The Moon is conjunct the 4th house cusp (IC) and squares the Ascendant-Descendant axis of relationships.

The Moon being at the lowest position in the horoscope wheel is at her  best and indicates feeling very secure in what she's doing.

She's directed from within and very well connected with her primal urges and emotions.

However, because the Moon co-rules her 10th house of career and the Moon squares the 1st-7th house axis of relationships, her career drive, ambitions and goals will clash with her partner(s) or relationships (in the widest sense).

Also, her (broody) mood swings may add to the issues she may experience in her relationships.

Jupiter in a Gauquelin zone is statistically often found in natal charts of independent people who are often involved in politics and/or positions of power.

Also, according to statistical research, it was shown that actors and actresses (beside politicians) statistically often have Jupiter in a Gauquelin zone.

Both groups of people live their life in front of an audience and propagate something, are showy or want some message to go out.

The Moon is out of bounds, i.e. beyond the maximum declination of the ecliptic.

According to the fabulous research by Kt Boehrer, this Moon's position denotes orphaning or some alienation from the mother and this configuration is indicative of abandonment by one or both parents and thus lacking the mother's love and care for whatever reason.

Kt Boehrer claims there is a compensatory factor at work, resulting in achieving success, recognition and wealth.

Women with a natal out of bounds Moon will usually have at least one child and this child is often unplanned and/or unwanted.

The relationship with the child(ren) can be difficult leaving the mother disappointed.

However, when two out of bounds Moon people marry, the overall influence may become a bit more balanced and less tense though.

The Sun, Moon and Saturn are all at the same numerical degree in a sign (25°).

This configuration indicates, among others: to be lonely or alone, the single, to separate or divorce, the parental separation or divorce, to face issues and/or delays in relating or bonding, to feel sad, the self-control, to be dependent on one's own mood, the widow or separated woman.

It's just interesting to know that Emma Watson's parents divorced when she was 5 years old and this may reflect this configuration.

The love life of Emma Watson

Emma Watson desires lots of privacy and is very private about her personal life.

Reportedly she told that she "would hate anyone that she were with to feel like they were in any way part of a show or an act."

It's her understanding that "in Hollywood, who you’re dating gets tied up into your film promotion and becomes part of the performance and the circus."