The (Love) Life of Bo Derek 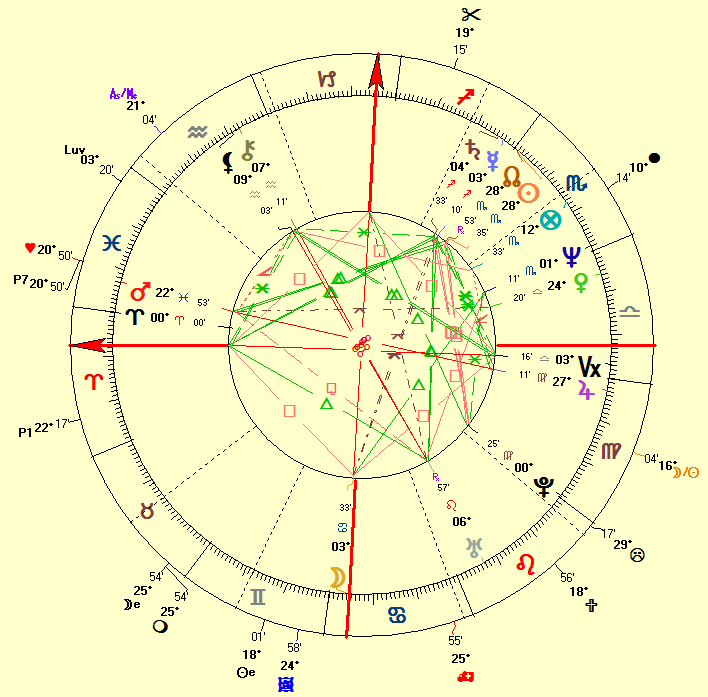 Standouts in the horoscope of Bo Derek

Not to overwhelm you with information, we will only assess the horoscope of Bo Derek by looking at the factors that only have some meaning for her love life.

An emphasis on the 3rd Quadrant implies a life influenced and even steered or directed by others, encounters, someone else, a partner or an audience.

It's the Quadrant that is the least interested in developing oneself and rather gets caught up by nurturing others or someone else.

Often, there is public attention, some interaction or involvement with others, an audience.

Most planets posited in water signs indicate that she absorbs a lot of information and experiences.

The water element is also a very private one, not seeking public recognition.

This is confirmed by the ruler of the Ascendant intercepted in the 12th house in Pisces.

The downside of a predominant water element is becoming (co-)dependent, seeking a shelter and security of attachment.

Bo might be very sensitive and may easily feel inadequate and anxious.

Her 8th house stellium (with the Sun, Lunar North Node, Mercury and Saturn) suggests (social) isolation, strength, following principles and issues about being loyal to someone or to some group.

There is some concern with security.

Pluto at a so-called "critical degree" (0° Virgo) points to the following:

In her natal chart, we find the following powerful and predominant connection:

The Grand Trine in fire signs, wants to be busy in a very self-expressive and spontaneous way.

When the Sun is exactly conjunct the Lunar North Node our research has found that in a female chart, chances are high of being married only once, often ending in widowhood as well.

Though Bo is married twice now, it indicates a lasting love bond anyway.

This aspect is often found in charts of child performers also.

The Moon in a stressful position (in front of the 4th house cusp) is indicative of rejection, defeats and Waterloo-experiences between the ages of 16-18 (the Moon is conjunct the IC).

There is such a huge need and hunger for a family and a home to feel secure.

The domestic area is shielded off from the outer world, is forbidden terrain for others and she might not stand interference from others.

The love life of Bo Derek

Reportedly, it was hate at first sight, not love.

In 1973 John took her to Mykonos (Mikonos), a Greek isle, for the film "And Once Upon A Time", together with his wife American actress Linda Evans.

During filming, John Derek and Bo began an affair which prompted Linda Evans to quit and divorce John.

To escape charges for statutory rape, John and Bo moved to Munich, Germany, then to Tijuana, Mexico until Bo's 18th birthday.

It was John's 4th marriage.

John died on May 22, 1998 during emergency heart surgery in the hospital in Santa Maria, California with Bo at his side.

She currently lives with actor John Corbett since 2002.

They married in a private ceremony in December 2020 "around Christmastime."